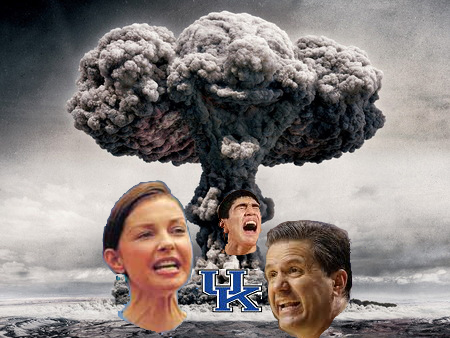 While you were heading home from work, the NCAA released a statement announcing the permanent ineligibility of Kentucky freshman Enes Kanter. Many thought that Kanter would be impervious to this harsh a ruling, since the compensation he received was simply to eat and live during the basketball season. But no so, says the NCAA:

The NCAA student-athlete reinstatement staff has ruled University of Kentucky men’s basketball student-athlete Enes Kanter permanently ineligible for receiving benefits above his actual and necessary expenses while playing for a club basketball team in Turkey.

If you read the full statement, we're talking just $33,033. Kentucky plans to appeal, but, that will certainly take a while for the NCAA to circle back on this. It's interesting, once you read this August 2009 story from Scout.com's Evan Daniels, that Kanter finds himself in this position after not accepting a lucrative pro contract in Europe so he could instead play high school ball in the U.S.

Now, given his talents, Kanter will likely focus maturing his game to prepare for the 2011 NBA Draft. Leaving the Wildcats really, really thin up front.