Share All sharing options for: Colorado, Alec Burks are befuddling 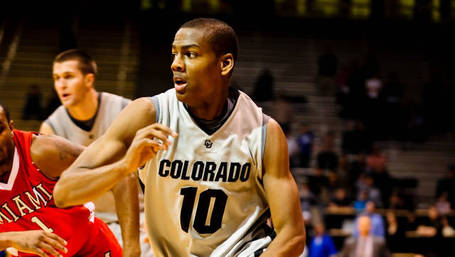 I took in Colorado - Harvard yesterday, in hopes of leaving with a vote of confidence for Tad Boyle's club. NCAA Tournament-less since 2004, the backcourt duo of Alec Burks and Cory Higgins generated a decent amount of chatter coming into the season, convincing us the Buffaloes were formidable and ready to contend in the Big 12.

But the problem with a featured duo, unfortunately, is that basketball forces you to play five a side, and the Buffs don't have much going for them beyond the two potential pros. Connecting on 10 of 23 shots from beyond the arc, the Crimson made this game about them, "blowing out a Big 12 team" and perhaps positioning themselves for their first ever Ivy League title.

The Buffs are rail thin and undersized up front, and don't have a reliable point guard to initiate the offense. Additionally, they don't appear to trust each other. Of their 19 made baskets against Harvard, only five were assisted on, while the Crimson were prolific sharers.

And while Burks and Higgins did combine to score 41 points, neither appeared poised to fix his team's stubbornness. Burks, while clearly possessing more natural talent than anyone in, and probably within one hundred miles of, Lavietes Gym, seemed hungover from a turkey dinner, ready for the trip back to Boulder. Plenty of NBA scouts and personnel were on hand to dissect Burks every move, and while the sophomore guard with a quick handle infrequently darted glaces along the sidelines to check the facial expressions of those on hand to judge, it never quite encouraged him enough to become a game changer or even make his teammates better.

It's difficult to permanently write off the Buffaloes this early in the season. Heck, it's tough to write anyone off before December. But with a 2-3 start to the season that includes losses to Georgia and...wait for it... San Francisco, there's little to indicate that Colorado can right the ship at this time.