The Art of the Blocked Shot: Frame by Frame

Share All sharing options for: The Art of the Blocked Shot: Frame by Frame

The second installment in our technological series focuses on a specific play from the 2000 NCAA Tournament. In this frame by frame breakdown, we're going to take a look at the positioning of a weak-side defender and how he can impact a game. But before we get started here, it's imperative that you consider how freaking cool it is that we can even do something like this in the first place. Technology has evolved in such a way that ANYBODY can break down game film and learn the nuances of this wonderful sport, one single frame at a time. It's something that not only gets us closer to the action on anpersonal level, but makes us all better fans in the end. Everybody wins. Okay, back on task. Big Ten rivals Purdue and Wisconsin are squaring off in the 2000 Regional Finals.... 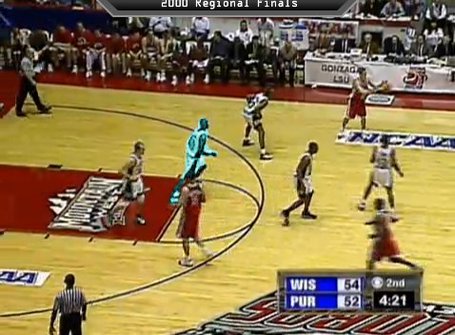 The player highlighted in turquoise, and the obvious focus of this breakdown, is Purdue's Greg McQuay. A senior at the time, the 6'7" big man played two years with the Boilermakers and averaged 9.4 points, 5.4 rebounds and 1.0 blocks per game. What McQuay was well-known for, however, was his elite athleticism as a weak-side help defender. To put it simply: He loved to come out of nowhere and send shot attempts flying in the opposite direction (and really, who doesn't?). 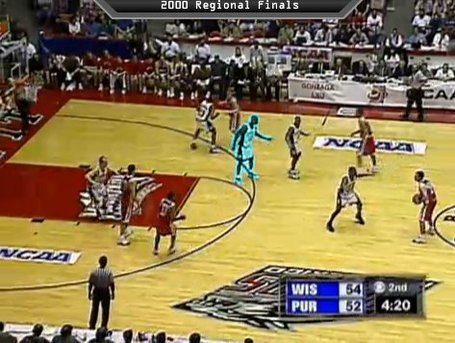 Keep an eye on where the ball is set to go here, as the Badgers have a distinct advantage with McQuay stationed out at the three point line. It's interesting to note that McQuay's true intentions are to get his teammate down to the low post to cover the 2-on-1 scenario that has developed. Instead of clogging the lane on his own, McQuay is infinitely more valuable as a help defender and thus remains on the weak side.

Much more after the jump... 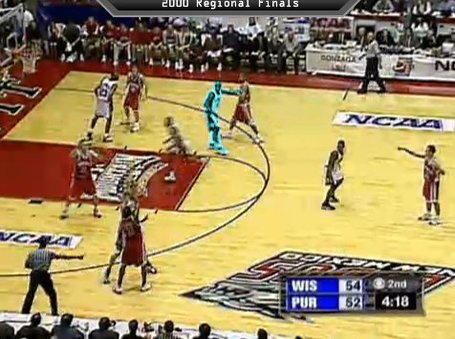 While his teammate scrambles to shut down the open path to the basket, McQuay begins to creep inside the paint. You'll notice that not only does he have the best view of the player who has just been passed the ball because he's shifted his position, but he has the single best path to alter the shot as well. This was not by accident, folks. 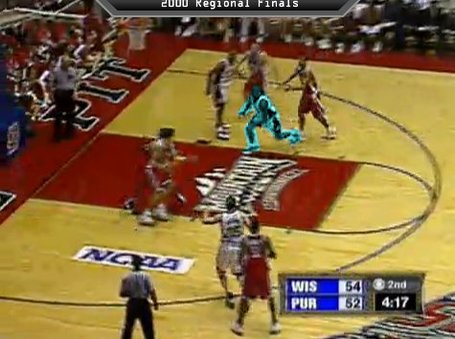 As the Wisconsin player makes an aggressive move towards the basket and prepares to throw something ugly at the rim (clearly due to his strong position and lack of open teammates), McQuay releases from his defender and makes his move. As long as there isn't any sort of adjustment by his opponent like a pump fake or jab step, McQuay is in such a great position that it would be a travesty for him not to alter the shot in some way. 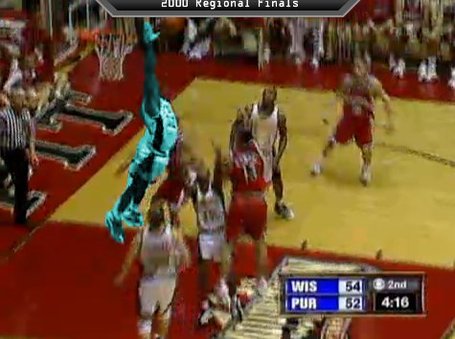 And so it goes. With significant momentum and his timing all but assured, McQuay has little trouble swatting the rock out of the air like a beach ball. Having freaky athleticism helps too. 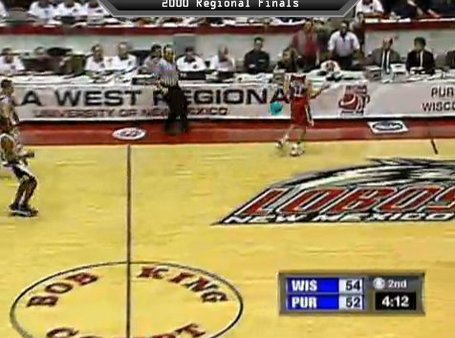 This is where it ended up four seconds later. Now that's how you play help defense.