Share All sharing options for: Searching For: Trajan Langdon 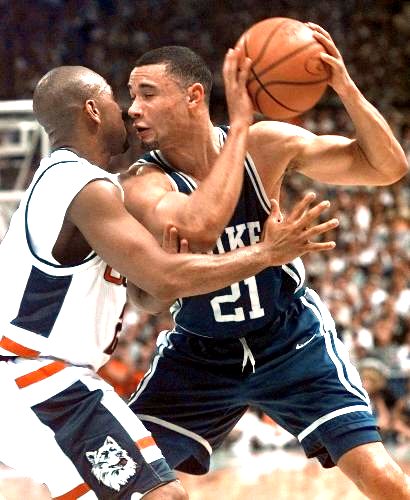 The Duke Blue Devils are riding high amid another national championship and the subsequent influx of five-star recruits to Durham. With that in mind, we'll check-in with a guy who starred for the Blue Devils during the start of another period of Duke dominance just over a decade ago.

During his four years at Duke, he shot 86% from the free throw line, he set the school record for three-pointers, and finished ninth on the all-time Duke scoring list. Strangely enough, Duke never game him an athletic scholarship.

Many of you may, like myself, have the images burnt in your memory of Langdon stumbling up the court, failing to muster up a shot attempt as time expired on Duke's national championship game loss to Connecticut in 1999. The truth is, Duke wouldn't have even had a chance to tie that game were it not for Trajan Langdon.

Trajan was drafted in the 6th round of the 1994 MLB Draft by the San Diego Padres. His time in college was dedicated to living the dream of any two-sport athlete. He averaged 14.5 PPG over four years at Duke, and during the summers he played in the Class A Northwest League for Spokane and Pioneer League with Idaho Falls.

After the dismal summer of 1997 in which he hit just .189 in 103 plate appearances, Langdon left baseball behind to fully pursue his basketball career.

In his junior year, Langdon led Duke to a 32-4 record, averaging 14.7 PPG. They advanced all the way to the Elite Eight before falling to eventual national champion Kentucky and their impressive starting five: Wayne Turner, Nazr Mohammed, Jamaal Magloire, Scott Padgett, Jeff Sheppard.

Six future NBA players starred on the 1998-1999 Duke Blue Devils team that made it all the way to the national title game, with the heart and soul being Trajan Langdon. Nicknamed the Alaskan Assassin, it was Langdon's penchant for hitting dagger three's that earned him the name and the fame.

After averaging 17.7 PPG during the regular season, Langdon guided the Devils through the tournament and into the title game against UCONN. With Corey Maggette and William Avery coming up small, and Elton Brand being triple-teamed throughout, it was Trajan and his silky-smooth jumper that kept Duke in it. Down one, with under ten seconds left to play, Coach K had the ball go to his best player...

Rather than try to recapture the drama with words, watch the final seconds here.

Months after that crushing defeat, Langdon was drafted 11th overall by the Cleveland Cavaliers, much higher than most scouts projected. He was the first Alaskan ever drafted into the association.

Langdon played just 10 games in his first season with the Cavs. Hampered by a bad knee, he had season ending knee surgery in February.

In his first full season (2000-2001), Langdon led the Cavs in free throw shooting and 3-point shooting, but played just 17 minutes per game. Playing time and production dwindled during the 2001-2002 season, Langdon's last in the NBA.

Realizing he'd never have the quickness to play big minutes in the NBA, he moved his family to Europe and signed with the Benetton Treviso of the Italian league. Between 2002-2005, Langdon bounced around from Italy to Turkey to Russia, finally settling in Moscow with the CSKA Moscow basketball club for the 2005-2006.

Langdon has become a Euroleague star, leading Moscow to four straight Euroleague title games from 2006-2009. In 2007, Trajan garnered first-team all-Europe honors but CSKA lost to Panathinaikos in the title game. The Alaskan Assassin blew up in 2008, shooting CSKA Moscow to a Euroleague title and winning Final Four MVP honors. Over the last several years, Langdon has played alongside several former NCAA stars on CSKA Moscow including Pops Mensah-Bonsu(George Washington) and Terence Morris(Maryland).

English language TV program Russia Today did a feature on the expatriate this summer. As you will see, Langdon's a typical Dukie: business-like, family man, well-spoken, boring, monotone, not funny...

Trajan Langdon is now 34 years-old, the eldest member of his Russian team, and beloved by Moscowins everywhere. It's anybody's guess how many more seasons he plays in Russia, but his mark in the Old World has been made. As for his name in the States..he should be the idol of any American kid lacking fast twitch muscles but blessed with incredible shooting ability.