Share All sharing options for: Whoever wrote this Boston University basketball Groupon email is either a complete fool or absloutely hilarious 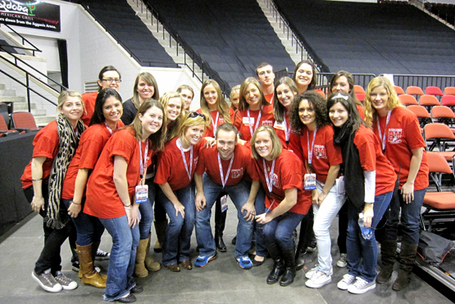 If you're a subscriber to Groupon, or some of the dozens of other splinter deal-of-the-day emails, then you know its success is primarily predicated on girlfriends who think they can fit eight date nights into a week.

Look, hunny, half-off bike tours... and tapas and whale watching and art museum passes! Let's get all of these!!!

Many of you are nodding in agreement with me that Groupon is the single worst thing to come out of this digital communications age. So as a method of dodging a litany of offers that could potentially wipe out my weekends, I get them sent to my inbox each morning. I stay ahead of the game, and select the deals I can tolerate. If I buy a small handful each month, then I'm never forced into $40 worth of food for $20 that I am not even remotely interested in digesting. I dictate how Groupon controls my relationship. Taking this sort of initiative actually makes me look like a true gentleman.

Tying all of this in with college basketball, check out this colorfully written deal I received this morning to buy discounted Boston University basketball tickets. It's aimed directly at every single ardent non-basketball fan in eastern Massachusetts. I've bolded what really stood out:

Basketball has all the fast-paced action of soccer, but its much smaller net is defended by five times as many people—it's no wonder that all soccer has been permanently canceled. Celebrate the king of indoor sports with today's Groupon: for $20, you get four tickets to a Boston University Men's Basketball game at Agganis Arena (up to a $40 value). Choose from the following five games:

The Boston University Terriers men's basketball team defends its home court for another sneaker-squeaking season of exorbitant point totals. Fresh off their performance in the America East title game and the College Basketball Invitational semifinals, the Terriers are a preseason conference favorite. Agganis Arena's steep seating offers vertigo-inducing views of every fast break, daring three-point fadeaway, rim-rattling rebound, and spontaneous combustion. Witness an in-conference clash on the Binghamton, Maine and UMBC dates—or watch the Terriers get into a finger-snapping rumble with La Salle or St. Joseph's. Agganis Arena's six concession stands will keep your throat's cheering muscles greased with hot nacho cheese down to the last buzzer-beating bucket.

As much as I would like to drop a few zingers here, I simply cannot muster up the wit. The posting speaks for itself, and is a classic example of not having a clue about your intended audience.

***Apparently Groupon hires stand-up comedians in Chicago as copywriters. If someone can confirm this was written tongue-in-cheek, we would really like to know.