Who Is? Ramone Moore

Share All sharing options for: Who Is? Ramone Moore 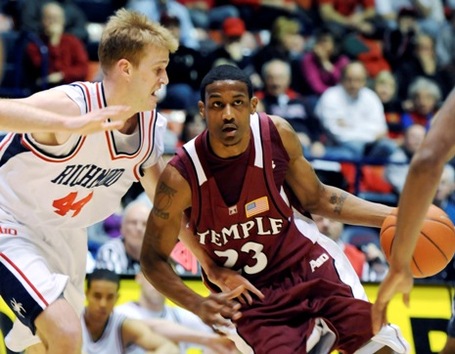 During his first two years at Temple University, Ramone Moore played in shadows of a cast that included Dionte Christmas, Ryan Brooks, Lavoy Allen, and Juan Fernandez. Allen and Fernadez are still around, but now they're playing sidekick to the rising star Moore.

This is Ramone's first season as a starter for the Owls, and the 6'4'' shooting guard has made his presence known. He's averaging a team high 14PPG on 41% FG shooting so far this year. Unlike many wing players, Moore doesn't get most of his points from beyond the arc--he's just 7-23 from 3PT -- rather it's his explosive first step and ability to finish around the rim that is making heads turn.

The Philadelphia native has been steadily improving year after year, in part because of rigorous summer workout sessions with Temple trainers. Late last season, Moore's reputation as a scorer began to develop when he averaged over 16 PPG during a seven game stretch. Fast forward to December 9, 2010, and Ramone Moore was no longer a sixth man, he was THE man. In last week's battle with Georgetown, Moore shot 12-18 from the floor on his way to a 30-point performance in Temple's win over the Hoyas.

Looking forward, Temple squares off against Villanova in what should be a dandy on December 30. The Big Five matchup will be another great test for the Owls, and Moore will have a chance to gain more national respect when he goes head-to-head with The Two Coreys, Fisher and Stokes.