Share All sharing options for: Searching for: Chris McCray 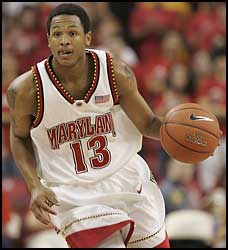 It's that time of year when grade reports from universities and colleges all over the country become official. In light of that, we take a look back at a Maryland hooper whose report card became very public, for all the wrong reasons.

After the Terrapins 2002 National Championship, coach Gary Williams brought in a much ballyhooed recruiting class featuring Nik Caner-Medley, Travis Garrison, John Gilchrist, and Chris McCray. Needless to say, for a variety of reasons this uber-recruiting class didn't pan out in College Park.

All four of these guys had their "man-I-wish-he-would-do-that-every-game" moments, three of the four ran into trouble with the Po-Po, and zero of the four reached their full potential.

Caner-Medley, now playing in Spain's ACB league, was often criticized for his soft and inconsistent play, a far cry from the tough drunk he played at home. A McDonald's All-American coming out of high school, the 6'8''/240lb. Travis Garrison was physical presence in the paint and at the local bar scene during his four years in College Park. Gilchrist showed flashes as a freshman and looked to be NBA-ready after leading the Terps to an improbable 2004 ACC Championship. However, a falling out with Coach Williams prompted Gilchrist to leave school during his senior season.

Chris McCray, from nearby Capital Heights, MD, had an NBA body at 6'5''/200lb and an improving skill set as a two-guard. He was the unquestioned leader of this star-crossed class of 2006 and the Terps best defensive player. After averaging just 3.1 PPG as a freshman, McCray's scoring jumped to 11 PPG his sophomore year as a starter. That year, Maryland overcame a disappointing regular season by shocking Duke in the ACC Tournament title game.

Chris was voted a team co-captain before his junior year, affirming Coach Williams' and the players' trust in him as the team leader. He responded with some explosive plays like this against eventual national champion UNC. While McCray had a solid year statistically shooting 45 FG% and 90 FT%, Maryland went 19-13 and settled with an NIT appearance.

Ranked 21st in the preseason polls heading into the 2005 season, Maryland hoped that their gifted senior class would finally put it all together. They started the year 11-2 and had risen to 12th ranked nationally in the first week of January.

McCray was leading the Terrapins in scoring at 15.2 PPG and shooting the 3-pointer at 37%. He had improved each year at College Park, and was off to a terrific start in his senior season to cap it all off.

That is until a first semester grades were released...

In late January 2006, McCray was ruled ineligible for the rest of the season ending his basketball career at Maryland. His mother Shirleeta raised a little hell about the program's negligence in ensuring her son's eligibility, but it was all for naught. McCray was a big boy (22 years old) and it was pretty clear he had no interest in attaining even scholastic mediocrity. He had mailed it in, and it cost him a possible return to the NCAA Tournament and maybe even a career in the NBA.

In the 2006 draft, one filled with a bevy of talented shooting guards (Roy, Redick, Brewer, S. Brown) McCray went undrafted. Instead, he signed a free agent contract with the Milwaukee Bucks and appeared in five games during the '06-'07 season before being waived.

Shortly after, he latched on with the Dakota Wizards and won the 2007 NBDL Championship with them. His game still left much to be desired by NBA teams. Looking to improve further, McCray did the standard tour in Europe. He played the '07-'08 season for Belgium's Telindus BC Oostende and jumped over to Basket Rimini Crabs in Italy for the following season.

He returned to the States for the '09-'10 season and seems to have found a home with the Sioux Falls Skyforce. He appeared in 39 games last season for the Skyforce and in ten games this season, McCray is scoring over 13 PPG.

Maryland fans will always wonder what could have been had that talented quartet avoided the bars, did a little homework, and play to-GETH-er. McCray has put those days in his rearview though, and all he wants is another shot at the NBA. If you're ever wandering through Sioux Falls, you should check him out-- the guy can still stuff it.