When will Coach K become the all-time wins leader?

Share All sharing options for: When will Coach K become the all-time wins leader? 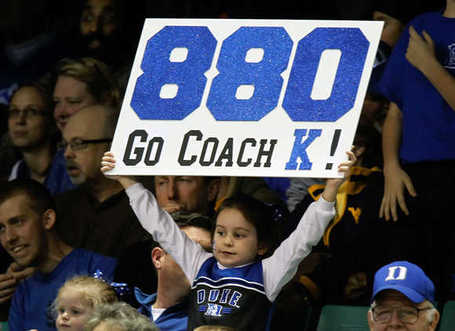 Maybe people don't care, maybe it's just because I've been off the grid sunning in the Virgin Islands then snowed in for 48 hours at the Philadelphia International Airport, but few seem to be making note of a historic college basketball milestone that, suddenly, has favorable odds of occurring in late March, right when the country is fixated on the sport.

Browsing Duke's schedule and being mindful of their sound play, it's becoming more and more likely that Coach K will stand atop the career wins list when One Shining Moment reverberates through Reliant Stadium on April 4th. Undefeated with an average scoring margin of 26.7, the earliest Duke can give Coach K career victory #903 would be against an overmatched SWAC or Patriot League champion in round one of the NCAA Tournament (to be played in Charlotte for all you guys who love overspending to witness history first-hand). This would mean Krzyzewski would lead an undefeated Blue Devil team in to Chapel Hill and notch career victory #899 on network primetime TV against North Carolina. He would then tie Knight upon winning the ACC Conference Tournament just eight days later.

To be a bit more practical here, Duke has at most 28 games to get those 23 wins. The Blue Devils could slip up four times during the regular season, win two conference tourney games, and win the region they're sent to, and that would be enough for Krzyzewski to be the all-time wins leader in college basketball. One other win-loss permutation to consider: any situation where Coach K enters the 2011 NCAA Tournament with 897 career wins, which would mean  #903 could either be earned by winning the national title, or in a meaningless game next fall, reminding us how this year's squad shriveled up when it mattered most.

Nobody is really talking about it now, and commentary on the milestone's significance is for another time, but you best believe that given television's love affair with the Dookies, this would become the ubiquitous Championship Week and March Madness story line as the Blue Devils seek to repeat as National Champions.

As a fan who got into this game thanks to Coach K's great teams during the early 90s, my heart would be set to a flutter as it unfolded.