Share All sharing options for: Searching For: Lee Nailon 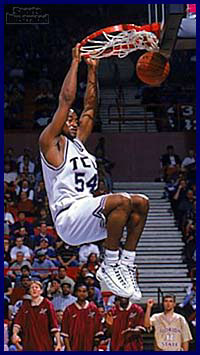 Considering that our blog title gives a shout out to a once promising Syracuse guard gone astray,we can't stray away from giving you that tingly "Oh Wow I Remember Him" feeling. When TCU announced Monday that they too would be leaving the crumbling Mountain West Conference. it only seemed fitting to take a stroll down memory lane with one of the meanest hoopers to ever play for the Horned Frogs.

It was just thirteen short years ago that Lee Nailon enrolled at TCU. The 6'7'' forward from South Bend, Indiana jumped on to the national scene as the top scorer on a TCU club which led the nation in points per game in the 1997-1998 season. Notable mid-major peers at the time? Bonzi Wells (Ball State), Pepe Sanchez (Temple), Earl Boykins (Eastern Michigan), Kenny Thomas (New Mexico), Wally Szczerbiak (Miami Ohio), Lamar Odom (Rhode Island).

For TCU, the old saying applied, "The best defense is a good offense." ... This offense was beyond good. Scoring was up all around the country that year. Three teams averaged over 90 PPG, but TCU topped them all scoring 97.2 PPG.

During one stretch in late 1997, the Horned Frogs ripped off seven straight games of 100 points or more including an otherworldly three game streak of 153-138-133 points respectively. In the seventh game, Lee Nailon exploded for 53 points in a 106-83 TCU win. Opponents feared Nailon the most, but he was hardly the only weapon in a lineup where guards Mike Jones averaged 21.3 PPG and Malcom Johnson put up 18.7 PPG.

This potent TCU team rose as high as #13 in the AP poll before falling to Florida State in first round of the NCAA tournament. They haven't made it back since.

After averaging 24 PPG over two prodigious seasons, which included an NCAA  appearance in 1998 and an NIT bid in 1999, Nailon set his sights on NBA glory. An unstoppable force from inside 18-feet, it was uncertain whether he had the height to continue such dominance at the next level.

Scouts described him as a "devastating scorer and rebounder at the college level", but as this as this 1999 NBA draft report reveals he was regarded as very poor man's Anthony Mason. He was drafted 43rd overall by the Charlotte Hornets setting off a nomadic decade of basketball and life for the South Bend, Indiana native.

He started his pro career with Adecco Milano in Italy, but returned to the Hornets after just one season. From 2000-2002 he filled a reserve role, averaging 10 PPG in 2002. At the time, Lee was seen as one of the real bargains in the NBA.

After spending the 2003 season with the New York Knicks, Nailon notched some serious frequent flier miles during the 2003-2004 campaign. He played in 57 NBA games that season, 27 with the Atlanta Hawks, eight for the Orlando Magic, and 22 with young King James in Cleveland.

Lee Nailon followed up his best Jimmy Jackson impression with his finest NBA season in 2004-2005. The forward started 51 games and averaged a career best 14 PPG and 4 RPG. While Lee impressed enough to garner a Facebook fan page in his honor, it apparently wasn't enough for the Hornets. He was traded to the Philadelphia 76ers in the off-season.

Twenty-two games into his stint with Philly, Nailon drilled his wife Marti in the face bringing his time in 'the league' to an abrupt end. It was Nailon's second run in with the law. His other was with a future NFL Hall of Famer.

Soon after, Lee Nailon traveled back across the Atlantic and re-ignited his international career. Since 2006, Nailon has played for Bnei HaSharon in Israel, Lokomotiv Novosibirsk in Russia, Al-Riyadi in Lebanon, and Leones de Ponce and Piratas de Quebradillas in Puerto Rico.