Who Is: Mark Lyons

Share All sharing options for: Who Is: Mark Lyons 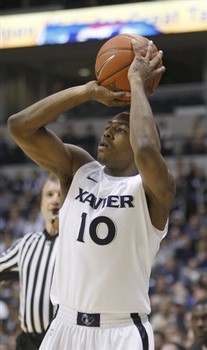 It was a classic holiday 'people helping people' story that went viral just two days ago. You've probably seen it, but if not: Xavier guard Mark "Cheeks" Lyons, stranded at home in the upstate New York blizzard, caught a ride on the Albany team bus for the Great Danes road game at Xavier. He proceeded to thank his Good Samaritans by sinking a career-high six three-pointers in a 22-point Xavier rout.

With Lyons grabbing national attention this week, it seemed like a fitting time to uncover this kid's unique path to Xavier.

Back in the summer of 2006, Mark Lyons played alongside guards Jimmer Fredette and Talor Battle on the Albany City Rocks team in what made up one of most talented backcourts on the AAU circuit. The team finished third in the country at the AAU National tournament, the winner that year? The D-1 Greyhounds featuring OJ Mayo, Bill Walker, and Alex Tyus.

While Fredette had the shooting stroke and Battle the blazing speed, some close to the team said Lyons was the best athlete and ball-handler of the three. When they parted ways at the end of the summer, there was no question big time basketball was in their future, but the jury was out on how they'd all get there.

Due to his catchy nickname and All-America status, Fredette ascended to nationwide fame over his last two seasons at BYU. Battle has starred as one of the Big Ten's top scorers over the last three years, but due to Penn State's perennial cellar dwelling, he's only regionally known.

You may wonder, then, why Jimmer and Talor are set to graduate, while Lyons is just a redshirt sophomore. Well to make a long story short...

During the 2005-2006 season, Lyons played for Schenectady High School in his hometown. He sliced up area competition, earning 8th team all-New York State honors in the process. A deeper look at the list of NYS All-Stars will reveal names like Rob Gronkowski of the New England Patriots, Devin Ebanks of the Los Angeles Lakers, and a slew of other big names.

While he was unstoppable on the court, things didn't work out so nicely at Schenectady for Cheeks. Whether it was a bad attitude, big ego, or just a poor overall situation, Lyons was intermittently benched, and did not finish out his junior season on the court.

Cheeks transferred to South Kent Prep in Connecticut for the 2006-2007 season and then to Brewster Academy in New Hampshire for the 2007-2008 year. At Brewster, Lyons led the team in scoring with 21 PPG and seemed more than ready for the next level. Finally, he had enough of New England prep schools and Cheeks followed his commitment to play college ball at Xavier.

Voted onto the Atlantic 10 all-Rookie team in 2008, Lyons was slated to be a major contributor from the moment he stepped onto campus. Just before the season started though, the NCAA came soaring in to play party-pooper like only they know how. Due to new eligibility requirements, the NCAA ruled Lyons only a partial academic qualifier. He was forced to join Indiana transfer Jordan Crawford as the most talented redshirt duo in the nation that year.

Last season, Lyons was the sixth man for first year coach Chris Mack on a team that advanced to the Sweet 16 before falling to Kansas State in that overtime thriller (with Gus Johnson on the call). Cheeks was fifth on the team in scoring with 7.8 PPG as he finally got a chance to show off the elite quickness and leaping ability that scouts had been talking about since his prep days. With Crawford off to the pros, Lyons has stepped into the starting lineup this season and helped filled the scoring void averaging 13.5 PPG for the Musketeers. This video suggests he may also be making noise in the underground rap game as well.

The Capital Region in upstate New York is far from a high school basketball hotbed. In the last decade, many have gone on to play Division I ball, but a short list of the most notable players reads like this: (Willie Dean-Purdue, Lionel Chalmers-Xavier, RaShaun Freeman-UMASS, James Thomas-Texas, Craig Forth-Syracuse). These names may ring a bell, but certainly don't initiate any nostalgia for the average college basketball fan.

Hence why it was so rare to see three big-time D-1 prospects come along, all in the same class, all from the same area. After watching his buddies rise to collegiate fame while he remained in obscurity, Mark Lyons is finally primed to live up to his billing--he's ready to be a star.