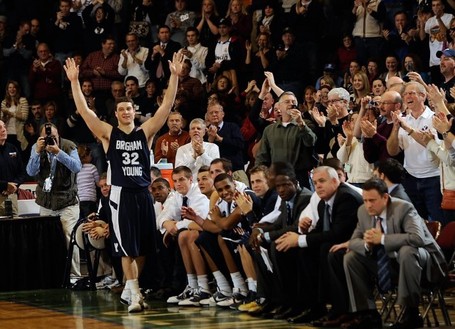 For a city that's hosted the likes of Aerosmith, Phish, and the Ringling Brothers, last night may have been the greatest spectacle of all.

An overflow crowd of 6,400 fans jammed into the 4,800 seat Glens Falls Civic Center to witness the return of one of New York State's greatest basketball players ever, Glens Falls' own Jimmer Fredette.

Like he has countless times before, the Brigham Young senior point guard rose to the occasion. He led all scorers with 26 points, dazzling with an array of tough fadeaway jumpers and a handful of flashy assists as BYU cruised to a 86-58 win over Vermont.

Over the last twenty-two years, area fans watched closely as Fredette grew from a pudgy youngster with a sweet stroke into a local legend who carried Glens Falls High School to the state championship game. As his basketball career has unfolded at Brigham Young, his cult following has evolved from two small pockets in Provo, Utah and Glens Falls, NY, into a nation of college basketball junkies enamored by the Mormon kid with a weird name and a lights-out jumper.

Throughout his prep career, many in Albany's Capital District surmised that Fredette might transfer to one of area's many private schools with more visibility and basketball prowess. Instead, Jimmer remained loyal to his home high school, winning with the same teammates he won with since grade school.

During public appearances this week, it was evident Jimmer was still the same humble kid that area folks knew long before the NBA scouts came calling. He was still grateful for the love and support, respectful to the hordes of local media, and above all hopeful that he could put on a good show for his adoring fanbase.

The night opened for Fredette much like it ended. After an electric three minute standing ovation during player introductions, the Cougars jumped out to an early lead with Fredette scoring seven points in one 30 second flurry to start the game. It was evident Coach Dave Rose's plan was to run sets for Jimmer early and often.

While BYU maintained control throughout with their balanced attack, Jimmer's hot hand cooled during a 17-minute stretch from the 10:17 mark in the first half all the way until 13:40 was left in the second half. Just when the "If he stays cold this will suck" feeling started coming over the crowd, Fredette responded with back-to-back buckets.

The game's defining moment came with just over eight minutes left and BYU leading by 19. With the shot clock winding down, Jimmer drove left off a double high post screen and into the lane, and reminiscent of this basket v. Florida, scoop shot the ball up between two fouling defenders and in for a three-point play. Classic Jimmer.

Seconds later on a break away, Fredette dropped a no-look behind-the-back dime to Kyle Collinsworth for an easy lay-in bringing the capacity crowd its feet.

Another fadeaway three-pointer followed by a three-point play with two minutes to go capped off his sixth 20-point effort of the year. One final rousing ovation as Fredette subbed out of the game lasted for several minutes and made for a fitting ending to a truly unforgettable evening in Glens Falls.

As for the big picture, BYU moves to 9-0 on the season and keeps Jackson Emery's prediction of an undefeated season alive. Speaking of Emery, he impressed with maximum effort on both ends of the floor and even threw down a second half jam with ease. Fredette and Emery rank up there with any 1-2 combo in America. However, Jimmer's disinterest in defense keeps them from claiming the top spot. Former BYU star and friend of the Fredette's, Danny Ainge was at the game. You have to believe that if Fredette falls to a late-first round pick in June, Boston would scoop him up. After all, finding a job is about who you know, not what you know, right?

Vermont certainly has the talent to make moves in the America East conference. While they agreed to play in this impossible situation, and ended up getting blown out, they definitely showed flashes of brilliance. They have big guys who clean the glass in Evan Fjeld, Brian Voelkel, and Garrett Kissel and capable yet inconsistent guards in Brandon Bald and Joey Accaoui. Wouldn't be surprised to see this team occupying some region's number 14 seed when its all said and done.