John Wall should get media trained

Share All sharing options for: John Wall should get media trained 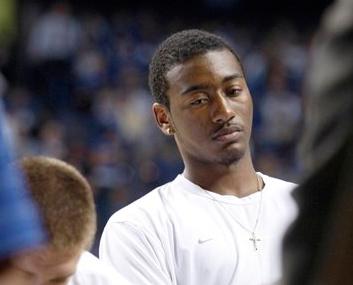 While it's only a big deal because we're talking Kentucky, John Wall, and John Calipari, there's an eye-catching blurb from the 2010 #1pick that has people speculating Blue Jesus is unhappy.

Following the Wildcats' win on Saturday against Vanderbilt, a finger-pointing Wall didn't hold back when the subject of his recent play was presented to him by reporters. He wasn't pointing to himself.

Wall was called out by Cal after the Cats lost to South Carolina. Cal was trying to defend Patrick Patterson who was taking some heat for his play, and in the process, he was strong about Wall.

"I didn't think I played that bad. I don't know what to expect. He's probably going to say I played bad today too so. I don't know. I just try not to listen to him and go out and play basketball and try and help my team win. To be honest, I really haven't been having fun for the last two weeks. It's just being frustrated and things like that so, I just got to figure it out before we go further in league play."

In short, this kid needs to STFU ASAP.  He's the most important player on the most important team in college basketball; running an offense under the tutelage of a coach who's just a little more than OK at prepping star freshman point guards for the next level.

So, John Calipari, do you have any comment on this? Probably not, at least not for the media. While the athletic department does a little damage control, I propose Coach Cal punish Wall by forcing him to do DeMarcus Cousins laundry for the next month. Or lock him in a room with the unassuming Jon Hood. That kid looks like a big ball of boring.