Share All sharing options for: College Basketball is videogame-less 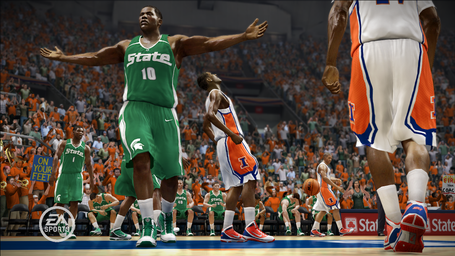 One of the few (maybe only) signs that I am capable of maturing from boy to man is the fact that I have shed the need to play video games. A little FIFA Soccer or Tiger Woods in moderation feels nice, but I am far removed from those epic 10 season Dynasties orchestrated on Madden, and the soon-to-be discontinued NCAA Basketball series. That's right, EA Sports is cutting the game out of its plans for 2011, likely because nobody really cares or bothers with it anymore. That's gotta be a little embarrassing for the devout college basketball fan, gamer or not.

NFL freaks have the aforementioned Madden, the college football series is popular and always improving its features and gameplay, and NBA Live seems like it's got a nice base of fans. But once NCAA Basketball was available on seventh generation platforms (Xbox 360, PS3) the developers of the series didn't seem to enhance the game each year that was similar to its video game brethren. Think about it, do you even recall any sort of TV or online advertising campaing for the game over the last five years? I can't. EA, like video gamers, seemed to lose interest in keeping the game appealing.

A spokesman for EA didn't quite shut the door on the posiblity of the series returning at some point, but with 2K sports dropping college basketball from its repertoire two years ago, it means were unable to take Alcorn State, in 500 MHz ATI Xenos graphics, let them do the improbable and run the table as a #16 seed, and turn them into a perenial powerhouse after three seasons.