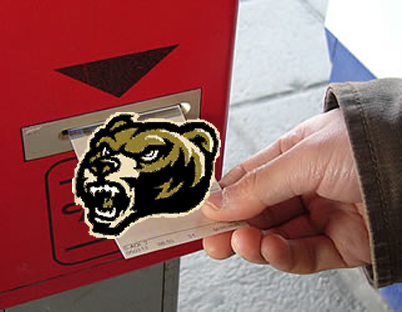 Back late last summer, when I was putting in hours of work researching the 2009-2010 one-bid leagues, it appeared that the stars were somewhat aligned for the Oakland Golden Grizzlies to be really, really good. Or something like that. I was blined by the four returning starters, led by Jonathan Jones, the school's all-time leader in assists, flanked by an excellent wing player and imposing big man. Their non-conference schedule featured games against Kansas, Michigan St., Syracuse, Memphis, etc. etc.. Tons of opportunities to at least earn at least a moral victory!

But none of that happened, and because they play in the lowly Summit Conference, nobody really gave a damn.

So I adopted the Golden Grizzlies (here and here) in a half-assed way to show support, knowing they had a few nice pieces that would be fun to watch this time of year. And after watching them rout IUPUI in the conference finals, I give myself a bit of the credit for righting the ship and living up to expectations put on them before the season started.

You say their 17-1 conference record just shows the lack of talent they played against in the Summit. I say they finally have their mojo working, and are maybe, maybe, going to be the most dangerous #14 seed since Bucknell back in 2005.

There's plenty more on the Oakland Golden Grizzlies on StatSheet.com.