Here is the bubble, as "last four teams in" becomes "final two teams in plus two pacing frantically up and down various hallways all afternoon" as Washington, Houston and San Diego St. steal automatic bids.

Others will disagree because they've lost six of their last eight games, but Illinois deserves a bid with five wins against top 25 teams. Minnesota controls their own destiny, but they're more deserving of a bid over Mississippi St. (also playing in a conference final this afternoon) because of their four wins against top 25 teams, and they have 12 wins of 19 points or more. The Bulldogs only have five.

Virginia Tech and Florida, you can only hope and pray. 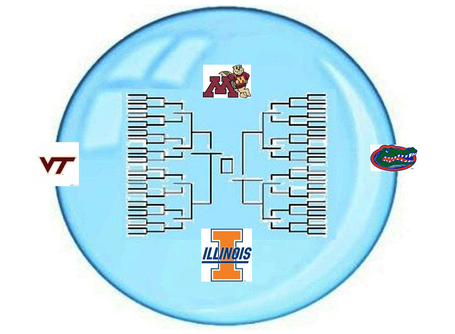