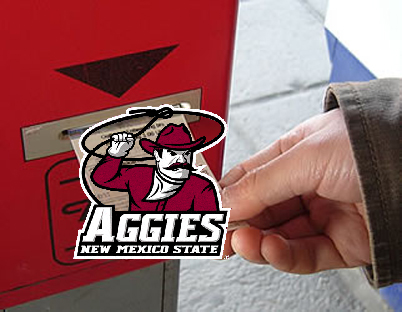 Winners of their last 17, Utah State was just straight chillin, minding their business and playing under the assumption they would be your 2010 WAC winners and earn an automatic berth to the dance. Then New Mexico State showed up in the finals, trailed for most of the game, but went on a 14-4 run late in the second half to steal the automatic bid. It was laudable not only because they came back, but also because they (the Aggies of New Mexico State) were able to play to the pace of their opponent (the Aggies of Utah State) getting only 60 possessions in the game. Gutty way to eek out an upset victory.

They're both named the "Aggies" but only one may be in the field of 65, as Utah State waits with baited breath this afternoon. But that's not our problem.

This was a fairly abbreviated take on the New Mexico Aggies. Learn much more at StatSheet.com.