Duke, CBS and the NCAA might be in cahoots 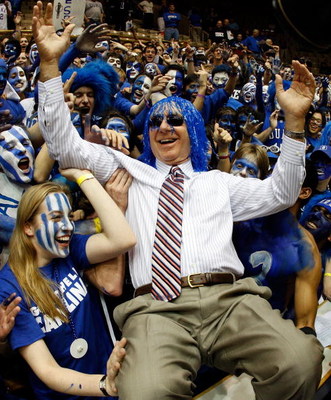 Many moons ago - when my brain was undeveloped and I valued the leadership qualities of Grant Hill and Mike Krzyzewski and the poise of Jay Williams and Shaine Battier - I was completely naive of the love Duke got from the national media. Furthermore, I was ignorant of the puke that the rest of the world wanted to hurl at Cameron Indoor Stadium. Just how could you not love these guys? They're perfect!

But I've grown up and after not going to college in Durham, my fanhood for the Dookies have waned. I see clearly now, and can't bring myself to justify the favorable seeding the Duke Blue Devils received this evening.

Just two weeks hours ago, this was a team jostling with the likes of Ohio State and West Virginia (two conference tournament winners, mind you) for the right to own a #1 seed. Now, as we frantically print brackets and make knee-jerk reactions to what just transpired during the Selection Show, Duke is essentially being deemed as the third-best team in the field of 65. And that is simply ticking a lot of people off.

And, what's crazier, they could potentially play a PAC 10 team in the second round. That's like a second round bye! This sort of favoritism from the NCAA sours my mouth.

I always filled out brackets under the assumption that the four #1 seeds were given that distinction because it was a near consensus belief that each were capable of winning a national championship. Given the 15 teams they've been grouped with, Duke will likely come within a few games of hoisting that trophy. But, in no conceivable way, can the Duke Blue Devils win the 2010 National Championship.  Here's to more hating...