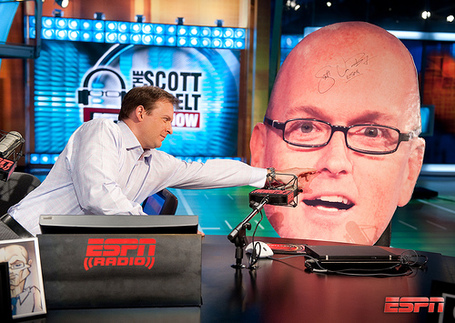 If you're not listening to ESPN Radio from 2-4 EST, there's a gaping hole in your life. Seriously. Scott Van Pelt is flanked by a New England guy with loads of talent and dry humor, and boatloads of basketball knowledge. That guy, Ryen Russillo, was nice enough to answer some of my questions on that big tournament starting tomorrow. Russillo tops off a great series of interviews (Seth Davis too) that went down here this season.

Q&A after the jump.

You’re more of an NBA guy, but give me a few reasons the college game is more entertaining than pro ball.  NBA teams generally run the same stuff. College is more diverse offensively/defensively. There is a suddenness to the tournament that is unlike any other event in sports. It is a guarantee that I will learn about about a team or player that today I know nothing about. I also am looking forward to getting ridiculously mad about CBS switching to another game during a shot attempt to tie it with time expiring.

How could the overall college basketball product be reformed? Could it use a 96-team tournament? Would it benefit from the elimination of the NBA age-limit?  The age limit helps College basketball more than it hurts it, at least you get John Wall for a year. We pretend we care about graduation rates but as fans we just want our teams to win. 96 teams may be one of those things that we get really worked up about but may not be that big of a deal when it happens, and it is going to happen. I would rather it stay the way it is but I almost want expansion so Joe Lunardi has to break down a team with an RPI of 120 and say that they are in because they went 1-4 vs the Top 100 RPI.

If we can have curling on for 30 days straight during the Winter Olympics there has to be a way to get games on multiple channels without having to buy a package.

The initial knee-jerk reaction to Duke’s seeding is that not only were the Blue Devils undeserving of a #1 seed, but they got a real easy run to Indy. Your thoughts?  About a month ago you could see that Duke was going to be in the mix for a #1 seed. This team is better than some of the other teams that the last 4/5 years were perhaps over-seeded but this comes down to resume vs. eye test. Their resume is really good, even though the ACC was down this year. I don't see how someone says emphatically that Ohio State or West Virginia is more deserving. Their bracket is far too easy in comparison to what Kansas is facing. Villanova is the weakest #2 seed, they should not be on the other side of Duke. Not debatable.

Do you see any glaring omissions by the tournament committee. Not really, I never understood why Virginia Tech was seen as in. They play no one and also lost every game to the three teams ahead of them in the ACC. Illinois would beat Virginia Tech, but the Illini just had too weak of an overall record. I find it annoying when people in the media act like leaving Tech out this year is the equivalent to stealing from children. If you didnt get in this year, you probably weren't a very good team. The tournament will be okay without Virginia Tech.

Do you see any egregious under/overseeds? Temple should be higher than a 5, Tennessee should be better than a six. Some Big East teams looked like they got hooked up, Pitt as a 3, Notre Dame as a 6.

John Wall and Evan Turner aside, what NBA prospects are you most looking forward seeing in this tournament? Ekpe Udoh's improvement has been terrific at Baylor, I love Greg Monroe's game, I think he will be even better when he gets away from Georgetown's system. Curious to see Darington Hobson from New Mexico in an intense setting. Also curious to see if DeMarcus Cousins does something to lock up the #3 pick or something so crazy he scares everyone off. I don't think that kid gets it.

Are there any players on a non-BCS team with a game that would translate nicely at the NBA level? See Hobson from above, he just does everything, leads UNM in points/rebounds/assists. Love watching Jimmer Fredette play from BYU, white guys always get labeled as slow, I dont think that's the case with him. Fredette is still a reach to think he will stay on an NBA roster, I need to watch more tape on him, he did drop 49 at Arizona this year. Matt Bouldin from Gonzaga is a very smart player, because he has been around for a while it feels like there is no buzz on him but I enjoy his game.

Since you're a University of Vermont alum, make a case for the Catamounts to be the first #16 seed to down a #1. I would have, but Tuesday they did a press release on Coach Mike Lonergan's appearance on my show, but the release only mentioned Van Pelt and not the fact that an alum would be interviewing him. Considering I set up the interview I am now rooting for Cuse.

Because of the name of our blog, we ask all people like you who are nice enough to give us the time of day and answer our questions to name their favorite forgotten college basketball player. Name a few of your favorites who never established themselves at the next level. I loved St. Johns growing up so any Matt Brust update would be appreciated. Brust apparently got a concussion trying to rough up Jordan in a training camp game with the Bulls, shockingly it didn't work. I loved Marcus "Man" Hatten, Willie Glass and of course the original truth, Walter Berry.

Finally, who ya got in the Final Four? Women's or Men's?