Mario Little is not allowed to be dramatic

Share All sharing options for: Mario Little is not allowed to be dramatic 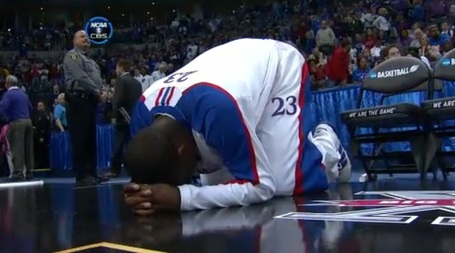 Following Kansas' shocking loss to Northern Iowa, it was pretty grim looking at all the Jayhawk players stand in shock as a true heavyweight went down. It's odd the odds-on favorite will not even be part of the second weekend of the tournament. The most inconsolable player though was not senior Sherron Collins, a player who poured his heart and soul into this game, this program, like no other. Collins was of course upset, but he wasn't sobbing with his head buried into the court like Mario Little. A redshirt junior who only averaged 12 minutes of play last season, Little looked as though his family had just suddenly passed. Was he wagering bets on his team? Are made men following him?

I have no problem with college kids crying after realizing the best time of their life has abruptly ended - Adam Morrison being the exception - but Little looked downright selfish for someone who comfortably sat on the end of the bench all season. Had it been Collins being pulled off the floor so BYU and Kansas State could take warmups, I would completely understand. But Mario Little is not Sherron Collins. His college career isn't over. He will be back. He needs to cool it with the crying.