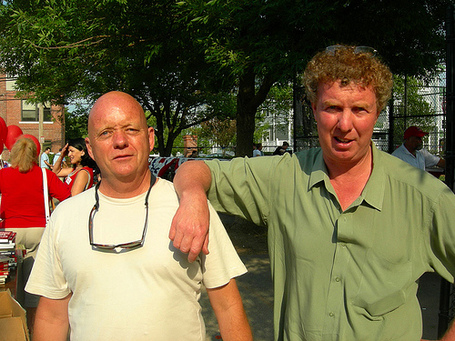 The Boston Globe's Dan Shaughnessy wrote a column about college basketball? I was perplexed myself when I opened my RSS feeds yesterday morning. His piece, his take, on tonight's culture clash between Kentucky and Cornell really stirred the pot for many in the Commonwealth (The Bluegrass one, of course) including lawyer/blogger/UK Nut Matt Jones of KentuckySportsRadio. Mr. Jones went toe-to-toe with Mr. Shaughnessy on the local Boston airwaves today (worth a listen), discussing and arguing graduation rates between the two schools, winning in a laugher over the aging curly-haired columnist who clearly is more cut out for poking shots at Curt Schilling's belly or Terry Francona's late inning bullpen decisions.

I appreciate and enjoy a few Boston sports media figures, but I love to loathe many more and can't side with my New England compadres on this one. Shaugnessy really has no idea what he's talking about here. In fact his argument that college basketball players should focus more on academics is about 15 years too late. We all know Kentucky basketball players set a goal not to graduate, but to get to the league. It's a different world. Shaugnessy lauds Big Red athletic department for making sure their kids get a degree, insisting it's imperative to a well-rounded interscholastic athlete. Too bad we already knew that.