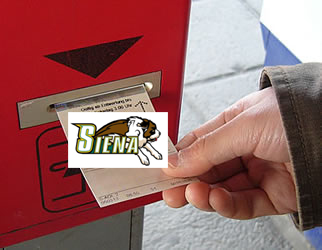 For the third consecutive season, the Siena Saints will represent the Metro Atlantic Athletic Conference in the NCAA Tournament. In his fifth season at the helm, Fran McCaffery has established Saints as a perennial mid-major not-to-be-messed-with. Leading assist man in the nation Ronald Moore (7.8 APG) has a bevy of scorers around him and the Saints have the athleticism to defend almost any team in the nation.

The problem this year? A couple things. 1. The Saints won't be sneaking up on anybody this year because the country knows they are legit. 2. Crunch time decision making. Over and over last night towards the end of the game and overtime, the Saints put the ball in Edwin Ubiles hands with 20 seconds left on the shot clock to make a play. Why would you ever take the ball out of Ronald Moore's hands man?!

They do more than Just Dance: Siena scored first round victories in 2008 and 2009 and flirted with the Sweet 16 both years before falling to Villanova and Louisville respectively. Will this be the year they get by the first weekend?

There's plenty more on the Siena Saints at StatSheet.com.