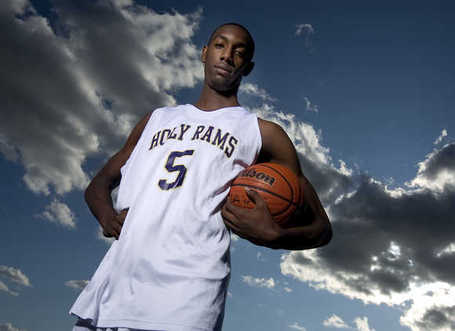 Pump the breaks! Does this mean that the Wolfpack are about to become relevant again? That may be the case, as the nation's highest ranked unsigned prospect, C.J. Leslie, officially signed with Sidney Lowe today - joining an already impressive class that includes two other five-star recruits Lorenzo Brown and Ryan Harrow.

Leslie's decision to stay and play in his hometown of Raleigh is an interesting story. Highly touted coming out of nearby Word of God Academy (which explains why the above photo looks eerily familiar), Leslie verbally committed to NC State as a junior, but was entertained by the Kentuckys and UConns of the world as the Wolfpack swam in a sea of irrelevancy going combined 71-62 over the past four seasons.

The thought of a big-time recruit spurning John Calipari makes me very intrigued by this kid.

The aforementioned trio of incoming freshman apparently are going to be entertaining to watch and difficult to guard. While the 6'8" forward is described as an elite athlete who can get to the rim, all that tangible stuff Leslie possesses is dwarfed by the simple belief there's some attention being given to the 3rd most visible basketball program in The Triangle. While Lowe's ass will certainly feel warm all season, I'm sure he's excited about this opportunity to compete again.