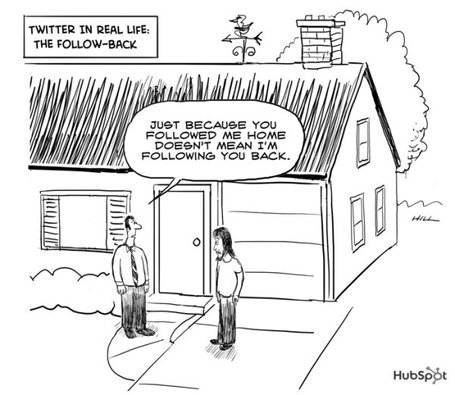 Just before tip off of Saturday's Final Four, @CHJournal tweeted a question to @JohnGasaway asking who he thought would pick up two personal fouls quicker that night: Butler's Matt Howard or Duke's Brian Zoubek? I know you're thinking that any question involving these two kids should be about who was more irritable, but stay with me now.

Always one for a prompt response, the Basketball Prospectus writer chose Howard because of the more physical frontcourt of Michigan State.  Shortly after, @ballinisahabit tweeted in concurrence of Howard as he got settled in to Lucas Oil Stadium, and @JeffEisenberg gave another vote to the Bulldogs' foul prone center, suggesting that the Zoubek/Howard foul debate would make for an excellent prop bet out in Vegas.

What did I do? Well I, along with a few hundred others who collectively follow these college basketball bloggers/writers, just watched it unfold from afar like a voyeur. I do that often with twitter.

While most of the country will remember the 2009-2010 college basketball season for The Shizz, the Bulldog's improbable run back home to the Final Four, and an abundance of Duke bashing, I'll remember it for the microblogging service that has filled a Wizards of Warcraft-like void in the lives of sports nerds who seek out equally as nerdy people to converse and share their opinions.

Whether they like it or not, I consider strangers like the aforementioned @ballinisahabit, @nunesmagician, @idiotsonsports, @jamesonfleming, @cbballexaminer, @raphiellej and a bunch more my friends. Friends in a really strange and creepy way my real friends just don't understand, but friends nonetheless. We share a common bond. We're married to our laptops. We need a release from the daily 9-to-5 or are aspiring sports writers looking to grow a personal brand. We like to make crappy jokes based on what we see unfolding in a particular game or television broadcast.  And finally, we like to engage in "twitter conversations" with guys whose words and opinions carry far more weight then our own. If @ESPNAndyKatz shows you props on twitter, well, that's a nice confidence booster to carry you through the night.

To the best of my knowledge, none of this is conducted in the finished basement of our parent's homes. I believe we're all pretty normal people. While I did get a chance to sit on press row with @zhayes9, the likelyhood I'll cross-paths with other members of my twitter-sphere is slim to none. Heck, I don't even know many of these dudes actual names, just their twitternym.

My favorite personal twitter story comes from a brief interaction with @jppalm. You see, Mr. Palm responds to everyone. Literally. Everyone and everything. It's incredible. One evening I tested his mettle asking if he gave career and girlfriend advice, and had any cheap travel information for someone looking to spend a week abroad. His three responses (all within 30 seconds of each other):

- "don't try and be a bracketologist, too many of em"
- "treat her like a princess"
- "http://www.cheapflights.com/flights-to-prague/"

It was truly life-changing.

Many are wondering if twitter will be a mainstay in our evergrowing social media and networking world. I can tell you first hand that it's a phenomenal tool to share ideas and interact with like-minded people, and I'll certainly be using it ad nauseam for at least the next three to five years. I've found that trying to engage my roomates (who get their fix from non-college basketball related programming) in conversation about how Cornell simply met expectations with a berth in the Sweet 16, or why Villanova was terribly overseeded at #2 just isn't worth the effort.

While there are uncertainties regarding the future of twitter, one thing is for certain: I've got friends in somewhat weird places.