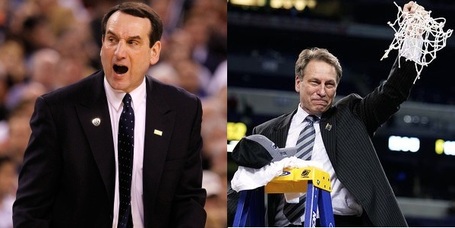 If you like hype and penciling in plans seven months in advance, you'll be delighted to know that match-ups for next season's ACC/Big 10 Challenge leaked this afternoon. What's even better, is that  Duke and Michigan State - two teams thinking Final Four in 2011 -  will square off as the premier game for the 11th installment of this inter-conference series, according to FoxSports.com's Jeff Goodman.

The Blue Devils will host the Spartans in a match-up that could pit the nation's #1 and #2 teams when the ball is tipped. That's good news, says me. Two balanced and experienced elite teams getting the opportunity to size one another up in early December is always a treat.

Other must-see matchups include Purdue-Virginia Tech, whose fan bases coincidentally had great weekends; North Carolina - Illinois, two teams more than capable of bouncing back from a disappointing 2010 campaign; and Ohio State - Florida State, a game sure to help us gauge the cajones of a young but talented Buckeye squad.