CBS to air Duke-UNC in primetime from Chapel Hill

Share All sharing options for: CBS to air Duke-UNC in primetime from Chapel Hill 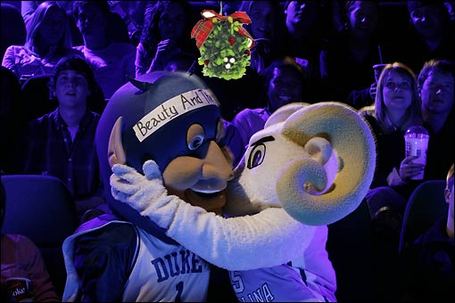 That's right. Next March, just seven days before Selection Sunday 2011, CBS will leverage this enticing match-up between Duke and North Carolina to promote their expanded tournament coverage, which don't forget will be broadcast on four channels following the new television rights deal with Turner Sports.

Dan Shulman and Dick Vitale, you get the night off.

So mark your Outlook calendars now for March 5th, at 8:00 p.m, and plan on this being a game that could have a major impact in terms of seeding for the NCAA Tournament. Duke - reigning champions - and the Tar Heels - poised to have a bounce back season with an incredible incoming freshman class - could both be ranked in the top 10 nationally; jostling for an ACC regular season crown or perhaps a coveted #1 seed in the East Region (being played at the Prudential Center in Newark, New Jersey).

I absolutely love the love college basketball is getting here by having two of its elite and recognizable "brands" pitted against crummy Saturday night programming on NBC and ABC. Granted, CBS is going to essentially use this two hour time slot as advertising for the upcoming tournament, but as long as Chris Daughtry isn't part of that campaign, I'm game.