The Big12 is dead, Kansas in a precarious place

Share All sharing options for: The Big12 is dead, Kansas in a precarious place 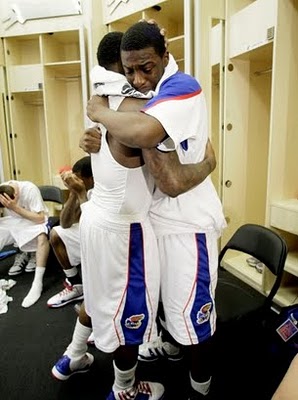 I have completely avoided any and all talk regarding conference expansion because of the rampant speculation and posturing the conversation usually centers around. Furthermore, the chess match to create one or two super-conferences has developed with only college football (and not college basketball) in mind. But when you hear "The Big 12 is officially dead," and BREAKING NEWS graphics coming at you in every direction after a long day's work, it has to pique interest for any fan of college athletics.

As Nebraska and Missouri bolt for the Big 10, six more Big 12 football schools (Oklahoma, Oklahoma State, Texas, Texas A&M, Texas Tech, and either Baylor or Colorado) figuratively figure to head wast, creating the Pac-16. It all seems cool and permissible on the surface, but not when you realize the odd school out is the University of Kansas, a school whose relevancy comes from a game played on hardwood, it's frightening.

As stated, college basketball is a non-factor in realignment. The suits are eying schools that crave football, and are located in media markets that carry an adequate number of viewers to  help keep those cable and network television deals rich. Basketball takes a back seat to this. It's quite embarrassing for a hoops fan like myself. Clearly we are not the cool kids.

The Jayhawks, one of the most prestigious and prolific basketball programs in the country, which generated $7.5 million last season, is currently facing a situation where there's a legitimate shot they would be forced to join the - gulp - Mountain West or Missouri Valley Conferences (so many natural rivals!).  It's hard to wrap your mind around, but almost a shoe in to happen as the Big12 dissolves. And when it does, Kansas will look like that 14-year-old youth soccer prodigy who vaguely remembers. Their domination won't feel right, and their fans won't feel proud.

Nothing is signed and official at this time. But when the dust settles, expect KU to be alone with no choice but to relegate themselves as a quasi mid-major. A slap in the face to college basketball.