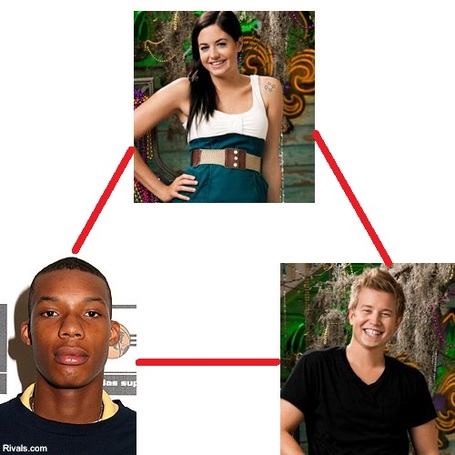 I haven't kept tabs on a Real World season since The Miz went toe-to-toe with that uber-abrasive Coral chick back in 2001. The series seems to have lost its punch, and now that I am older than nearly all cast members it's just plain weird to give a damn about these people's lives.

But while doing some channel surfing last week, I caught the tail end of the latest Real World: New Orleans episiode and learned that next week Mississippi State forward Kodi Augustus becomes part of a love triangle with two current cast members. Apparently Augustus has a history with Jemmye, but just four episodes in to the show the Baton Rouge belle has fallen for Knight, a likable dude from Wisconson recovering from an addiction to painkillers following a shoulder injury.

According to her official bio Jemmye, playing the role of person-always-comfortable-in-their-own-skin, "enjoys casual sex with no commitment, and she has a preference for black men."

So who will prevail on Wednesday night? A man full of chocolate lovin' who doubles as Rick Stansbury's starting power forward, or the Cheese/Puck Head roommate who knows how to party and pop pills? Size does matter but I hear it's really the thickness and width that count, so maybe the white dude stands a chance.