Share All sharing options for: How I became a fan of… the EA Sports NCAA Football series 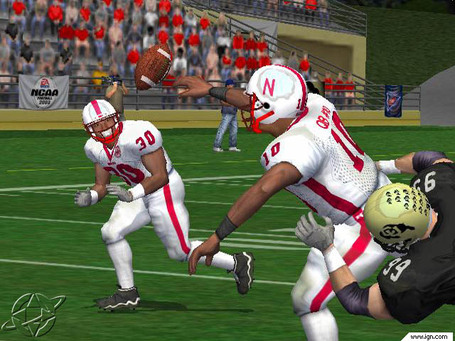 This post is sponsored by EA Sports NCAA Football 2011.

To celebrate the July 13 release of NCAA Football 2011, EA Sports asked the dozens of SB Nation college bloggers to help promote and preview the latest installment of the highly successful series. Luckily for EA Sports, I along with many of my high school and college friends are some of the more ardent fans of the series, so you don’t need a lot of arm twisting from this guy to gush about a personal favorite past time. As I enter adulthood, I’m still not sure if it’s proper or embarrassing that NCAA Football remains part of my life, but I must admit that it's the true catalyst for what hypes me up and gets me thinking about the upcoming college football season.

My first memory of NCAA Football was back in 2001. Play Station 2 was the console of choice, and it was then when it became customary to pick up the new game just before the start of school. Because who actually comes home from a hard day of high school and golf practice, and decides to study before bed? For those that remember the 2001 college football season, the Miami Hurricanes were king, both in real life and as 64-bit football players on NCAA Football 2002.  Still one of the most awesome collections of interscholastic athletes, the "U" had enough NFL talent to fill an entire pro team’s draft board and it was a blast to pit their stout defense against the option-centric Nebraska Cornhuskers, led by the dynamic Eric Crouch.

Two years later, laid up from the removal of his wisdom teeth, I spent hours recovering with NCAA Football 2004 (and pain killers of course). The Auburn Tigers were the trendy team that season, and I took it upon myself to groom Jason Campbell into a #1 NFL pick, uploading his draft class onto the premier EA Sports Madden series.  The Tigers went undefeated and played for the national title... if only it were a case of art imitating life.

Recently, my friends and I all agree that EA Sports has done an incredible job keeping NCAA Football series fresh by constantly tweaking the gameplay. Users are challenged to actually know that the heck they’re doing when their team steps to the line of scrimmage. No longer can you just drop back on 4th-and-26 to keep your drive moving, run an HB toss with your big, burly running-back and expect a 20-yard gain, or always feel peachy as you try and punch it in late in the game against a rival opponent. Heck, the game even manages to trick us into thinking Lee Corso is still the spry and witty analyst he once was.

I hail from New England - Maine to be exact - so I don't hold claim to a story that opens with "how I became a fan of [STUPENDOUS COLLEGE FOOTBALL TEAM]." But I am a huge fan of the game and everything that surrounds it, especially the NCAA Football series.