It's Confirmed: Corey Fisher Did Work in a Bronx Gym

Share All sharing options for: It's Confirmed: Corey Fisher Did Work in a Bronx Gym 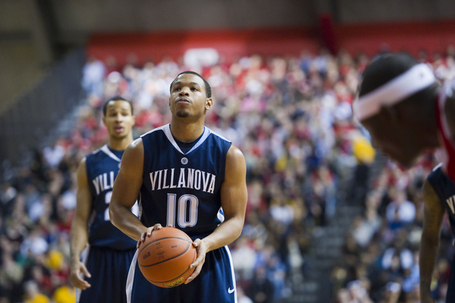 There’s been a lot of ruminating around the Internet this week, question the validity of claims made regarding Corey Fisher’s 105-point outburst in a Bronx, New York summer league game last Saturday.

Nearly one week later, we all know for sure that Fisher did indeed put on a show for privy fans in the gym at the Watson Classic. A PR firm representing Villanova, or the school’s communications department, finally took full advantage of their crafty guard’s accomplishment, offering him up to many of the major sports news sites across the web.

"It's true," Fisher told Yahoo’s "The Dagger" on Friday. "It never entered my mind that I would score 100 points. I was playing the game, and people in the crowd were yelling, 'He has this, he has that.' My teammates were finding me at the right place at the right time."

"I had 72 after the third quarter and I just kept scoring and scoring. I didn’t realize I was near 100 and then I go to the free throw line and people started going crazy.’’

Now initially was I was considering a little compare/contrast on Fisher’s Summer 2010 folklorish story with against Xavier guard Jordan Crawford, and his once-mythical dunk over LeBron James from 2009. Both occurred without the bright lights and capacity crowds, and both had the interwebs curious and buzzing with banter. But after mulling it over for a few seconds, I had a moment of clarity. Frankly, there’s no comparison between the two. Fisher’s performance - replete with 23 3-pointers (on a mere 28 attempts) and some colander-like defense from former and current college players - far out-impresses Crawford's.

For the upcoming season, I’ll set the over/under on "References to Fisher’s 105-Point Game Made by TV Crews Announcing Villanova Game" at an arbitrary 17. I’m probably way off, but expect this story to carry itself and remain fascinating to the general public all the way to through the Wildcats' season.