Searching For: Will Blalock

Share All sharing options for: Searching For: Will Blalock 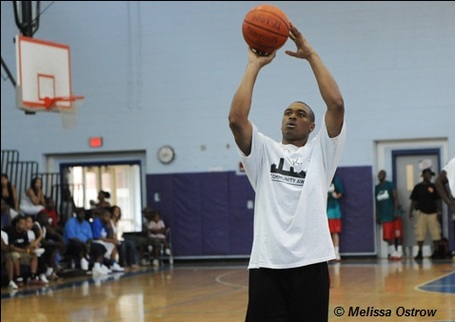 It has been some time since I crafted a "Searching For," and it's funny how a newspaper stand in downtown Boston can compel me to do so.

Will Blalock, product of the Hub and former Iowa State Cyclone, is, like many run-of-the-mill college guards from the good part of last decade, still trying to find his place and realize potential. He's a fringe player. A guy with enough talent to play in the NBA, but lacking consistency, or maybe a mid-range jumper, to secure a one-year contract. The Phoenix's Paul Flannery followed Blalock out to Vegas this summer to assess the former golden boy's game and stature among his peers, getting me up to speed on one of Boston's great prep players.

Playing for East Boston High and then Notre Dame Prep in the winters, and the BABC AAU program in the summers, Blalock was perceived as a living legend during his teenage years. But nationally, he barely cracked the top 100 in Scout.com's 2003 Prospects List.  His stardom as a prep player gave way to a mediocre career in Ames, Iowa playing alongside NYC-bred Curtis Stinson.

Since leaving Iowa State as a Junior in 2006, Blalock has logged exactly 166 minutes of play in an NBA jersey. It was his rookie year with the Detroit Pistons, a team who deemed him expendable just 16 games into the season. From there he's played minor league ball in Anaheim to pro ball in Israel, with many other stops in between. Other stops, like a stroke at Logan Airport that prevented him from attending the Seattle Sonics mini-camp, and also from living. Yeah that's right, Blalock had a stroke at the age of 24 due to a blood clot in his neck. He also was born with a hole in his heart yet maintains he is OK to continue pursuing his dream.

A story of perseverance aside, Flannery's story on Blaclock reminded me of the overall lack of  talent produced in the seventh largest media market in the country.  Sure the amount of prep schools in the area have drawn top-flight talents like Michael Beasley, Francisco Garcia and Jarrett Jack to Massachusetts, but they're not natives; they don't roc Red Sox caps tilted to the site. Right now, there is not one Boston-born active NBA player. Even more grim - former UConn forward Jeff Adrien and Notre Dame center Torin Francis might be the two most successful college players from the area in the last decade. You don't need their career statistics to understand that it's a shallow talent pool up here in the Northeast. The last Boston-born basketball player that really left an imprint on the college game? Try Kentucky's Wayne Turner from the late 90s.

So is Blalock really that special? Frankly, his game is just average when presented on a national stage, and the feature piece, while insightful and providing that tingly feeling of "oh I remember that guy," reminds us that Boston is not fertile grounds for Division I basketball talent. He left the Vegas with a deal to play in Australia. Always upbeat, Blalock explains it's a chance to lead, and secure his place in the basketball landscape.