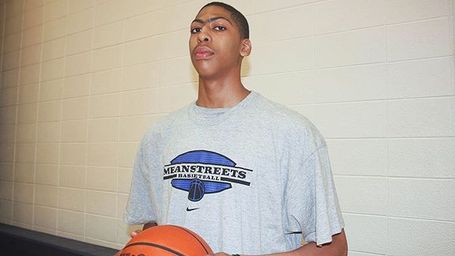 Rising blue-chip prospect Anthony Davis was at the center of a major journalism gaffe yesterday, one that could lead to legal repercussions and a lot of headaches for the Chicago Sun-Times' editorial board.

Sun-Times sports writer Michael O'Brien, which reported that the hometown Davis would choose to attend Kentucky in the fall of 2011, broke the story based around a single source, then supplementing that claim with sources for the Kentucky fan blog Nation of Blue, which also reported that Davis was headed to Lexington. In addition, it was also reported by O'Brien that (and this is where it gets nutty) Kentucky put up $200,000 for Davis to ensure he would play for them...seven paragraphs past the lede.

In swift fashion, a pair of real basketball journalists (Goodman & DeCourcy) tweeted that the report was an insult to good reporting, and would likely end up being taken down or heavily edited. It was, and their anger is warranted. While Nation of Blue can write and speculate and allege whatever they please, with minimal real consequences, the Sun-Times cannot operate like that. They're the17th largest paper by circulation in the United States, need multiple direct sources to confirm a story like this, and probably shouldn't be piggy backing off of a fan blog that is likely operating with a major case of confirmation bias.

Today, following threats of a lawsuit from the University of Kentucky, the paper modified their original story by cutting out the $200,000 figure to report, "rumors that Davis’ commitment is for sale have surfaced since he cut his list of schools down about a month ago." The pending lawsuit from UK and a local law firm is built around "constituting defamation." Considering John Calipari seems to be a major purveyor of recruiting drama, seeing the school take legal action and pursue a libel suit means they're damn serious about quelling any thoughts that money is pulling Anthony Davis to wherever he elects to go to college.

A lot of people are writing about this, but I think the best perspective out there is from the Lexington Herald Leader's John Clay. After receiving an email from a reader imploring him to go and actually find out why Darnell Dodson was booted from the team, Clay simply responded that he's heard too many rumors that he can't confirm to publish, meaning he is in no position to report on Davis and the $200, whether it is true or not. Neither can the Sun-Times. They look extremely stubborn on this, which is what a daily newspaper in the third largest media market can't afford to do.