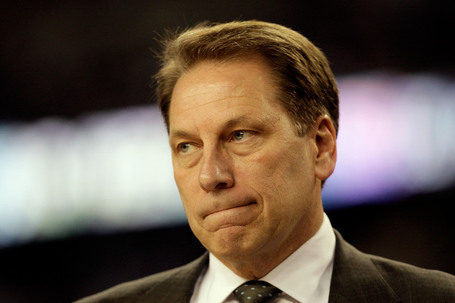 A startling story out of East Lansing, Michigan was posted early this afternoon by the Michigan Messenger, as two unnamed Michigan State Spartan basketball players have been accused of sexual assault. The incident, which occurred in a dorm room in the early morning of August 30th was revealed by the Messenger after obtaining a police report from Ingham County. You just have to love the FOIA.

The report, filled with redacts to protect the identities of the victim and the accused, outlines a deplorable lewd act no self-respecting male would want to have to tell their mamma.

According to the five-page victim’s statement in the police report, the victim had attended a Wonders Hall orientation meeting and had noticed the basketball players there. She then went room to room with friends and had several drinks. At about 11 p.m. she ran into the accused in the lobby of the dorm and introduced herself to them.

She agreed to go back to the players’ room after a conversation with the two.

Once in the room, the three started playing basketball using a mini-hoop. When the victim missed a basket, one of the men told her she had to remove an article of clothing. The victim agreed and removed her t-shirt because she had a tank top on underneath.

I'll stop right there, as it gets heavy in a hurry.

It should be noted that following a brief investigation, Ingham County's prosecutor has decided not to file charges against the players, but the damage may have already been done as speculation is sure to abound. Additionally, the story had been reported two weeks ago by The State News, but did not identify the assailants as Spartan basketball players.

Initially, I thought that one of the players involved was troubled former Spartan guard Chris Allen. But Allen was dismissed from the team on August 3rd, three-and-a-half weeks before the alleged sexual assault, meaning whatever the final straw was that forced Tom Izzo to show him the door was not this.

Another nugget to note is Korie Lucious' recent DUI arrest. The junior guard was pulled over early on August 30th just off-campus, the same night of this alleged sexual assault. If Lucious was one of the two players - and there's nothing in the Messanger's story, the police report, or currently out on the web to suggest that he is - then that's one hell of an unruly time. Right now, it's purely coincidence both occurred on the same night and just further humiliates the program.

Whoever is involved, it will be interesting to see how this unfolds and if we ever learn the names of the accused. For now, it's another notch on the belt of drama being worn by the school this off-season, and Midnight Madness is just 15 days away.