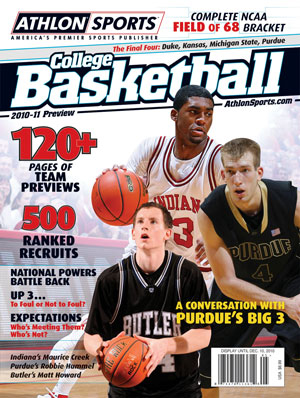 Much like when Owen Wilson exuberantly announces to buddy Vince Vaughn in Wedding Crashers that spring has sprung, we've reached that point in the year where there's real signs of life college basketball is right around the corner. It's so exciting!

The litany of ignominious grade scandals, eligibility rulings and instances of flat out lying - which have all given us pounding headaches - are slowly beginning to find resolution. Frankly, we are so over it.

Now earlier and earlier, it seems as though those attractive looking college basketball annual yearbook's are hitting newsstands, forcing fans to tack on another $7.99 to next week's grocery bill. You must have one of these, you need one of these to supplement your intake of online content, but God Almighty you shouldn't impulsively buy one of these things.

Today we take a look at Athlon's 2010-2011 College Basketball Preview, after the jump.

While Sporting News limits their feature articles, working under the assumption that fans consume the majority of their college basketball coverage on the web, Athlon's annual has plenty of content that's perfect for the avid college basketball fan who forgot about nearly every returning player and major story line over the summer. There's a heavy dose of quick-hitting sections that let you know what transfers matter, what coaches better get their crap together this season or get canned, and top-10 superlatives that remind you who the best shooters, defenders, big men, etc. are.

Since John Ezekowitz of Harvard Sports Analysis covered this with quantifiable data back in August, it's tough to give credence and credibility to Ken Davis’ article on whether or not to foul when up three late in a game. Additionally, it was a bit awkward to see their 2011 NCAA Tournament bracket covered in chalk, but I guess it’s tough to predict that sort of stuff eight months in advance.

Regardless, there's more than $8.00 worth of information here to prepare you for the upcoming season, so absolutely make the purchase if it's staring you down at your local newsstand.