Share All sharing options for: Enes Kanter got paid... 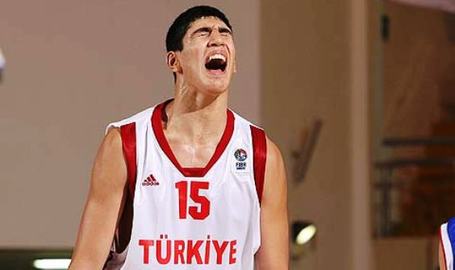 ...and the New York Times' Pete Thamel scooped yet another story that can damage the reputation of John Calipari and the University of Kentucky athletic department.

Enes Kanter, the top teen-aged center in the world according to Scout.com, reportedly has received upwards of $100,000 from Fenerbahce Ulker, the professional team he played for back in Istanbul. Club president Nedim Karakas snitched the story to Thamel after revealing to the NCAA that payments were indeed made to their precocious player, which included housing for Kanter's family and pocket money for himself over the past three years.

Fenerbahce stands to gain a lot from this revelation. Since Kanter is no longer a member of their club, but may now be deemed ineligible to play Division I basketball here in the States, Karakas' club would be owed a transfer fee from whatever European team Kanter ultimately suits up for this upcoming season. Essentially, the team may have simply dropped this knowledge on the NCAA for profit, not because they believed it was morally correct.

Thamel, you remember, brought to light the questionable academic transcript of Eric Bledsoe back in May. The blue chip guard struggled so mightily with academics his first three years of high school, only to transfer and miraculously hit the books as a senior. This pair of scathing stories really isn't sitting well with the rabid fans in Lexington. In short, it's Pete's fault...or he's not a reliable source...or he filed a story with a misquote. Either way, I don't expect him to get a nice Eggs Benedict meal at a quaint Lexington diner next time he's in town.

The demise of Enes Kanter reminds me of West Virginia's Turkish import Deniz Kilicli...only far far worse. Kilicli was forced to sit out the first 20-games of last season simply for playing with pros who were accepting monetary compensation before enrolling in Morgantown. Kanter's dilemma is two-fold: he and his family were taken care of while playing professionally in Turkey, and he lied about it to the NCAA. Tisk- tisk.

An official decision is expected by the end of the month, but you can expect the Wildcats to be without Kanter for the foreseeable future. The length of the suspension coupled with the high-ceiling of this 6'9" athletic freak could mean he never logs even one minute as a Wildcat, and simply seasons himself back in Europe before declaring for the 2012 NBA Draft.