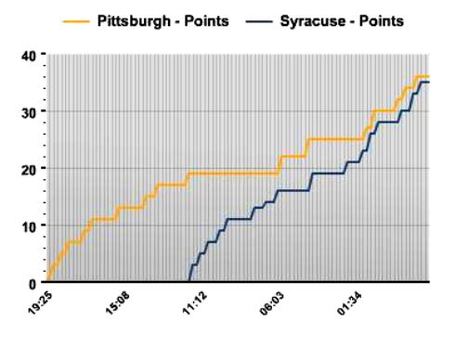 For those who like college basketball but are busy over another family dinner, a dance recital, or stuck on a train staring another train in the face, well then you're probably tracking the Syracuse-Pittsburgh game on your smartphone or laptop. Leveraging one of the many sites with a live gamecast (we're a bit partial to SCACCHoops.com), you have certainly been kept up to speed on this great Big East match-up, but are probably wildly confused as to just what the heck is going on at the Peterson Events Center tonight.

Check out this scoring chart from the first half. The Panthers, as you probably already know, jumped out to a 19-0 lead, denoted by that orange line that starts where the X and Y axis meet, moving upwards at a near linear fashion. That means they scored early and often, something Syracuse did not do. The Orange (strange that they are represented by a blue line here), waited nearly eight minutes to score their first basket, which was subsequently followed by a 17-0 run between the 12 and eight minute mark. Then as the first half came to a close, both teams scored in bunches while we all scratched our heads.

Just wanted to point this out, because sometimes graphs are fun!