After Sunday's Debacle, We Size Up the State of Northwestern Basketball

Share All sharing options for: After Sunday's Debacle, We Size Up the State of Northwestern Basketball 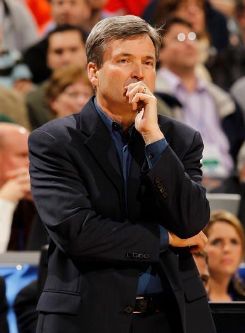 Entering this season, expectations were high that Northwestern might end the program's age-old futility and finally reach an NCAA tournament, something that no team has done in the 107-year history of Northwestern basketball. To put that in historical perspective, Teddy Roosevelt was U.S. President the last time Northw.....wait never mind, I just said they've never done it. It is a streak that is rarely discussed in the media, but after the Wildcats' disgraceful performance on Sunday it seemed timely to explore some of the issues going on in Evanston.

After their 20-14 season ended with an NIT loss to Rhode Island last March, departing senior guard Jeremy Nash told the Chicago Tribune's Teddy Greenstein that next year's team would be dangerous, saying, "If these guys play together and don't look for a one-man show, they will be really hard to stop."

Their 20-win season set a single-season school record, and with the return of their top three scorers coupled with Kevin Coble's expected comeback from injury, Northwestern's maiden voyage to the NCAA Tournament seemed imminent. The winds shifted this summer, though. Coble, the top scorer for the 2008-2009 Wildcats, left the team after a dispute with Coach Bill Carmody. Suddenly, a team which seemed to be on the verge of school history had to regroup.

This season, the Wildcats jumped out to a 9-1 start, but unlike year's impressive non-conference schedule, their best win has come against a weak bunch from Georgia Tech. Conference play has exposed top scorer John Shurna as a small-game player, and the Wildcats dropped their first four games against ranked Big Ten teams. Then, yesterday, Wisconsin came to town and the Wildcats laid down. That rhyme was only a coincidence, yet it accurately depicts the 78-46 drubbing that Northwestern was handed. A team that prides itself in defense and always battles at home was rendered inept by the Badgers.

It is easy to point fingers at coaches or managers, just ask Eric Mangini, Billy Gillispie, or Ty Willingham, but an objective view of the numbers shows that the program under Coach Bill Carmody has left much to be desired since his hire in 2000.

11- Number of seasons Coach Bill Carmody has been at Northwestern

0- Number of NIT victories under Carmody.

Carmody was a disciple and successor of legendary Princeton coach Pete Carril, to whom we credit the "Princeton Offense" and the mastermind of one of our favorite March upsets. In four seasons at the helm, Carmody guided the Tigers to two NCAA appearances and a 92-25 overall record.

What Northwestern got was a guy who could rock the business casual look better than any coach in America, but who couldn't recruit with Weber, Izzo, or KnightDavisSampsonCrean. There's more...

According to scouting service Rivals.com, since 2002, Coach Carmody hasn't landed a single high school recruit higher than three stars (out of five).  He has had some success bringing in European players, and European look-a-likes (Shurna) who are perimeter-minded big men perfect for his offensives schemes. But even in the slower-paced Big Ten they've managed just three winning seasons.

A common fallacy is that Northwestern can't bring in the athletes because it has such high academic qualifications. Okay, but Northwestern football has been to three straight bowl games, and while they are winless in them, the Wildcats pushed two Big 12 teams and an SEC team to the brink in each one. Also, Duke, Vanderbilt, and Stanford, three of the top private universities in the country, consistently field elite teams that compete at the top of their major conferences. Lastly, Carmody's winning percentage in Big Ten play is the worst among all Northwestern coaches in both male and female sports.

All reasons why Wildcat 'nation' was up in arms after the school inked Carmody to a two-year contract extension... Could it be, though, that the brass at Northwestern had a totally different viewpoint on Bill Carmody's body of work?

Maybe they saw Carmody, the all-time coaching wins leader at the school, as the face they wanted to keep representing Northwestern. They may have hailed Wildcats basketball as a program on the rise, albeit a slow crawl up the mountain. After all, the last two seasons HAVE been Carmody's best with the Wildcats have posted winning records each year... good enough to hover around the vicinity of the NCAA tournament bubble.

The past two years have also seen Northwestern reach unprecedented marks. In January of 2009, Northwestern upset ranked teams in back to back games. First, topping Minnesota at home, and then shocking Michigan State in East Lansing just days later. Last season in December, Northwestern cracked the top 25 in the AP Poll for the first time since 1969. It is accomplishments such as those that point toward a bright future. Still, Carmody searches for a winning season in Big Ten play.

It's quite possible that mediocre recruiting and performance isn't all Coach's fault? Maybe major Division 1 athletes aren't interested in taking the court at Welsh-Ryan Arena and it's 8,000 seats of which 2,000 are rarely warmed. It's conceivable that before the Byron S. Coon Center renovation in 2008, ballplayers preferred the sprawling state-of-the-art weight training facilities boasted by Ohio State or Penn State.

I submit that the biggest difficulty for Carmody when recruiting is convincing a four or five star athlete to: "Come play at Northwestern, where we have no basketball tradition and you have a chance to be a part of our 1,000th loss in conference history."(they're at 966). Perhaps the pitch should be, "Come play for me at Northwestern, where you can be part of the class that defines Wildcat basketball tradition."

For Bill Carmody and his Northwestern team, a 32-point loss at home is inexcusable. If they have any dreams of stringing together a third straight winning season and being that winning tradition, it's time to start defending the paint, challenging on the perimeter, and for John Shurna to step up and make plays against good teams. They must win seven more conference games to have a fighting chance come Selection Sunday.

Fortunately for Northwestern, the Chicago Cubs are nearby to keep the pressure off.