Who Is: Marshon Brooks

Share All sharing options for: Who Is: Marshon Brooks 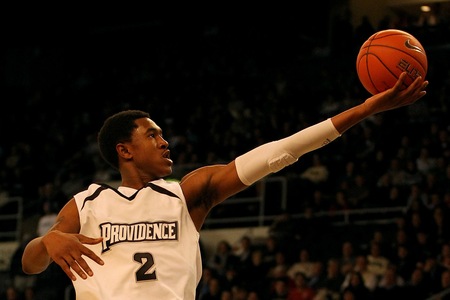 Early in the 2009-2010 season, Bill Reynolds of the Providence Journal championed then-junior Marshon Brooks as the next star of Providence basketball. Brooks told Reynolds that it was during a game against Sacred Heart as a sophomore that, "It was like the game started to get easy," Marshon said. For the skinny guard out of Georgia, it was a watershed moment as he realized his potential as a hooper.

As a prep, Marshon Brooks was a scrawny shooting guard overlooked by many a college coach, but not Keno Davis. As a high school sophomore, he was 5'10''. By the time he arrived on campus, Brooks was 6'5'' and by his second year in Providence, he had filled out and was holding his own in the physical Big East. He showed much promise as a sophomore, but his play was spotty. Marshon notched double figures in 15 games but scored just 36 points in his final ten games.

Brooks continued his weight training in the off-season and continued to develop as he entered his junior year. Marshon averaged 14PPG, going over 20 points six times but was widely overlooked down the stretch as Providence dropped their last eleven games.

This season, Brooks has taken his scoring and leadership to the next level. Just 21 games into this season, Marshon has almost as many made FT's (109) as he had in his last 63 games (113). The Friars picked up in Big East play right where they left off last year, losing six straight. Brooks has rallied his boys, and the senior has led Providence to back-to-back wins against ranked opponents. He's leading the team in scoring 23.4PPG and rebounding 7.5RPG, and might just lead them back into the picture in conference play.

All of the Friars' remaining games are on ESPN3.com. If you get a chance to catch a Brooks game, it will be worth your while- he can fill it up.