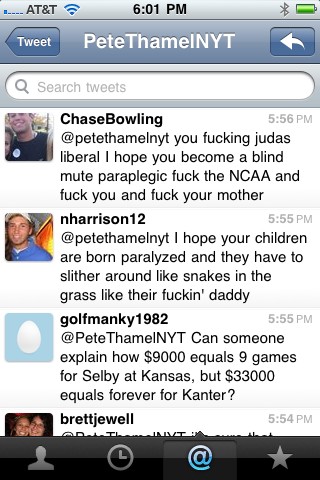 Last year I aired a grievance stemming from my longstanding personal beef with the state of West Virginia. I don't care for that place, and I caught a lot of flack for it, but residents of the Mountain State look like aristocrats based on the venom some UK fans are hurling in every direction following the upheld decision to keep Enes Kanter sidelined from playing college basketball.

Hat-tip to Card Chronicle on this one, but just run a twitter search for @petethamelNYT, the handle for the New York Times' Pete Thamel, of course, who shed light on Kanter's amateur status late last summer following an exclusive interview with Fenerbache Ulker's general manager, Nedim Karakas. Despite Thamel's imperfect fact reporting on the matter, the revelation to the general public was exemplary journalism.

It's awfully pathetic some people are convinced that because Thamel fueled the investigation that led to Kanter's ineligibility (although the NCAA was already looking into it), then he must like child pornography, has a fabricated/forged work resume, and wronged UK so much that he should lose his hearing and vision. He writes for one of the most reputable newspapers in the entire world, meaning he knows what he's doing. It's his job to break stories such as Kanter's. Apologizes if it ruined your winter.

I've always been fascinated with Big Blue Nation and their undying passion for the basketball team. We don't have enough of it in today's game, as football reigns supreme in many parts of the country. But whatever sort of respect and adoration I had for Wildcat fans has all but been flushed down the proverbial toilet, even though it's likely because of a few clueless social outcasts sullying the name of the school.