This is Madness: Maybach Music In Memphis

Share All sharing options for: This is Madness: Maybach Music In Memphis 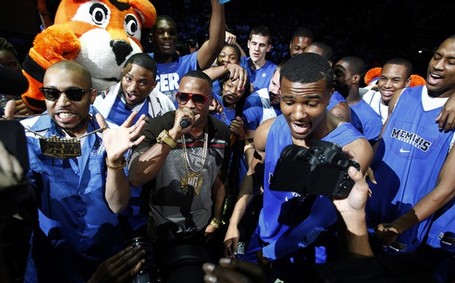 Because there's can only be many dunk contests and free giveaways to keep the interest level of fans and student high, the best Midnight Madness events have become the ones where rappers are imported onto the arena, or raves ensue. The University of Memphis knows this.

After suffering a whopping two seizures in as many days, the leader of the Maybach Music clique, Rick Ross (aka Ricky Rozay aka The Teflon Don aka Officer Ricky) had to cancel his much anticipated appearance and performance at Memphis Madness Fan Fest last night.

In a bind, head coach Josh Pastner got on his phone and dialed up local product Yo Gotti. Just 15 minutes before the event began, Gotti changed plans for a trip to perform in Little Rock, Arkansas, instead opting to fill in for the missing Ross, and essentially save the entire evening for fans.

The mixtape king performed at center court, much to the delight of Antonio Barton.

"If that would have happened at any other school, they probably would have brought in -- who knows?" Barton told the Memphis Commercial-Appeal. "Rick Ross and Yo Gotti are neck-and-neck. The performance was better than we all expected."

Street cred? Memphis has plenty of it. Consistent guard play? That remains to be seen.