Share All sharing options for: College Basketball Preview: What current players will pursue a coaching career (become a glorified townie)? 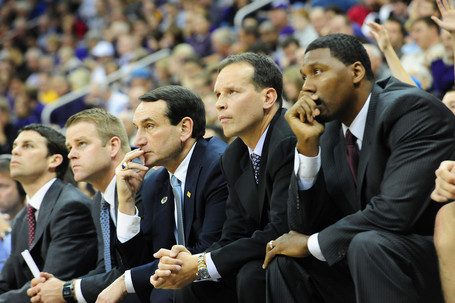 We all know them. The former high school jock who still hasn't moved away from the zip code where he zipped 40-yard crossing routes to his next door neighbor. At the time the future seemed bright and the ladies were plentiful, then that Division I scholarship offer never came in the mail, and academically that jock wasn't up to snub.  Quickly his less athletic peers went away, got educated, and got a career. The jock now has a labor job and is poking around the crowd on a Friday night as his former high school team takes the field.

If you think about it, college basketball has these types of townies too, and I say that endearingly.  It's a far more admirable story arc: a player that's good at everything but great at nothing, loved by his coach, has a stint overseas but can never crack more than a 10-day contract in The League.

Syracuse's Gerry McNamara; Pittsburgh's Brandon Knight; just about every white guard that played at Duke in the 80s and 90s. These are just a few of the game's former players who haven't quite left the school. These somewhat local legends, more like glorified townies, used to run the floor. Now they run the stat book.

This is a weird entry to help preview the upcoming season, no?

Well, anyway, there's no doubt the 2011-2012 season will provide us with at least a handful of team leaders turned assistant coaches.

Does your school or favorite team have a coach in waiting on its roster? Drop in a comment and let us know if you think they'd be good for the job.