Searching For: Chris Herren, A Review of "Unguarded"

Share All sharing options for: Searching For: Chris Herren, A Review of "Unguarded" 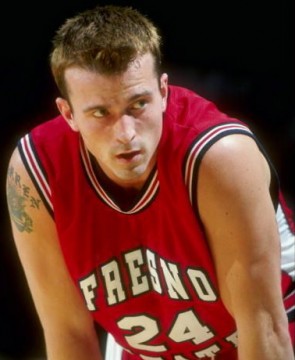 There are a lot of stories about crestfallen athletes who lose their way to drugs. It's been told many times with various endings.

But former Boston College and Fresno State guard Chris Herren's is a little different. Both in that he survived, and also because he's not afraid to divulge all the gory details if it means preventing the next precocious young talent from making the same mistakes.

As part of ESPN Films ongoing 30 For 30 series, "Unguarded' is a can't miss documentary that airs Tuesday at 8pm EST. I've never played the role of movie critic, but being able to screen the film nearly a week before it airs to the public - amongst those closest to Chris and his family - was a real treat.

Of the few recent films from the Worldwide Leader set against the backdrop of college basketball (Len Bias, The Fab Five, Loyola Marymount), this one resonates the strongest because it's incredibly raw and honest.

A local legend from Fall River, Massachusetts, Herren was arguably the greatest basketball talent from the Bay State since Patrick Ewing. He was a gritty hard-nosed 1994 McDonalds All-American guard who drank a lot in high school, did a lot of drugs in college, and did a lot more drugs for most of his short NBA career, all which set into a motion years of painful substance abuse.

Now he's more than three years sober, and some would consider it a miracle.

You're hooked on "Unguarded" from start to finish primarily because it isn't narrated. Instead, it's told by Herren himself, through a series of speaking engagements from the past year and those who stood by him through his ups and downs. It also features a number of family interviews from a local 1999 documentary on Chris that was never published - "collaborators from another dimension," as director Jonathan Hock describes.

Even if you have an in-depth knowledge of Herren's story, there's still plenty to be gleaned from the film. From his close relationship with former Fresno State head coach Jerry Tarkanian, to the mind numbing anecdotes about the times Herren was high the day of and sometimes during some of his biggest and best games. There's so many layers to unfold, and that's why Hock decided to pursue the project.

Currently, Herren tours the country telling his story, and teaches basketball to kids throughout Massachusetts and Rhode Island. His recovery has many parallels with Billy Edelin's. That alone drew me to the film, but it will absolutely engage anyone who remembers Herren's arc as it happened or just find fascination in tragedy-to-triumph theater.