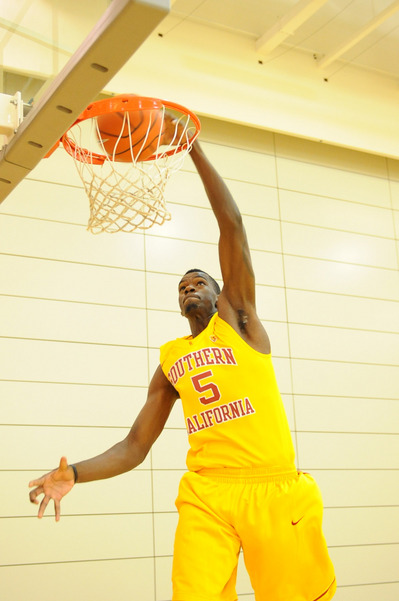 Growing up I played a lot of basketball with a lot of different kids in the neighborhood. One particular boy who always appreciated a nice game of one-on-one was a neighbor down the street. When the weather was warm we scraped knees and rolled ankles nearly every day. My neighbor had an immense amount of talent, and I was blown away that someone with so much natural ability would  "choose not to play" in any sort of organized league. I quizzed him, quizzed his parents, quizzed my parents even.

It turned out that neighbor of mine was a Jehovah Witness, and as a freakishly active kid growing up, I damn near cried when I learned the harsh reality that Kingdom Hall did not allow its members to participate in team competition.

The situation of my neighbor has always stayed with me, and I was reminded of it once again after reading this great piece on USC's Dewayne Dedmon by Sports Illustrated's Chris Ballard, published this week as part of the magazine's college basketball preview.

Living in Southern California, Dedmon's mother became a Jehovah Witness in 1995 to seek structure in her life. As her relationship with the church deepened, her son was growing faster than everyone around him. Naturally, Dedmon was drawn to the game of basketball and became sort of a folk hero in the San Bernadino Valley - "the tall kid who wasn't allowed to play."

After wrestling with the decision to essentially diss his mother's religious beliefs and pursue organized basketball, Dedmon's story from JuCo star to current NBA prospect is fascinating.

Hopefully this feel-good story can serve as a bit of a deterrent to what has been an incredibly ugly sports week.