The Morning After Recap: Saturday, November 12

Share All sharing options for: The Morning After Recap: Saturday, November 12

We can think of only one way to describe last night's onslaught of games: Simply phenomenal. With big time programs playing everywhere you looked, Friday served as college basketball's version of an all-you-can-eat buffet. If anything, there were almost too many games jammed into the same time-slots, so viewers likely had to make a choice about what ones they stayed with. The star of the night, however, was easily the Carrier Classic, which combined two of the best teams in America with breathtaking views of the surrounding San Diego Bay. The Tar Heels ran away with the game after being dominated on the boards early, but the winner and loser of the night were merely afterthoughts, as the spectacle itself rose to the forefront. As far as we're concerned the event was a resounding success, and the idea for future outdoor games probably needs to be explored.

Vanderbilt - Facing a talented Oregon squad, this was not the game for Kevin Stallings' crew to mess around. Good news: They didn't. John Jenkins drained seven threes, Jeffrey Taylor loaded up the box score with five steals and point guard Brad Tinsley made efficient use of his 17 minutes. Promising stuff.

UCLA - The Bruins were taken to task by Loyola Marymount, their first loss to the Lions since 1942. The defeat prompted ever-starving big man Joshua Smith, a complete non-factor in the game, to proclaim that his team "lost to some straight bums". Bruins Nation snagged the tweet, which has since been deleted.

Travon Woodall, Pittsburgh - You know him as Ashton Gibbs' backcourt mate, but Woodall dropped 25-6-10 on an unsuspecting Albany squad to wrestle the headlines away from his nationally-touted peer. He also chipped in five treys, two steals and a block, and could be the difference-maker for Jamie Dixon going forward. 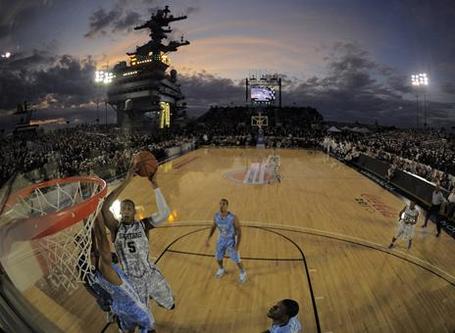