The one ESPN college basketball marathon game you shouldn't miss

Share All sharing options for: The one ESPN college basketball marathon game you shouldn't miss 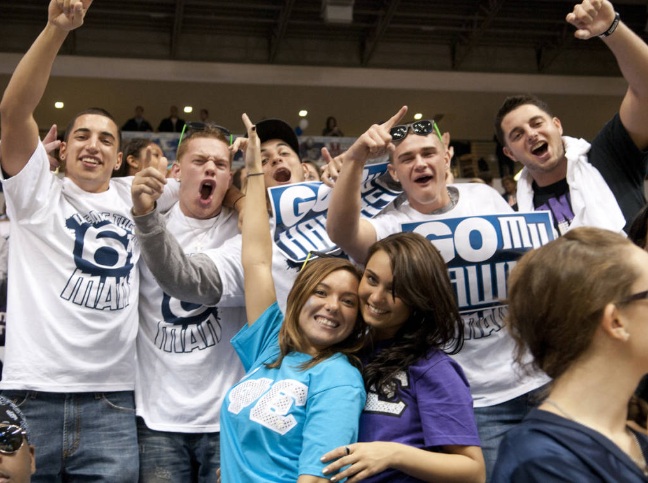 This year's schedule may be the best yet. Not only do you get the inaugural Champions Classic from Madison Square Garden, which could serve as the setting for Mike Krzyzewski to break the all-time wins record, fans will be treated to Florida - Ohio State and Belmont - Memphis. Washington State - Gonzaga is also a nice tilt to get everything started.

There's no doubt I'll be tuned in to the primetime games, while checking scores as they come in throughout the work day.

But if I can recommend the one can't miss game of the event, it's Drexel vs. Rider, which tips at 6am EST.

Yes that's right, a match-up between the CAA vs. MAAC that will have absolutely no bearing on the NCAA Tournament picture including no legitimate NBA prospects is what I'm most looking forward to. In fact, Rider appears to be a below average MAAC squad, a league that finished 19th in last season's conference RPI ratings.

Like your girlfriend getting up to watch the Royal Wedding this past June, my argument to start the day a few hours earlier than normal to watch a novel live television event probably doesn't make a ton of sense, so hear me out.

College basketball - college sports in general, really - is fueled by the fans and the kookyness they can provide from the stands. They're incredibly influential in that they enhance great games and mask sub-par ones. The more energy emitting from your screen, the more consumed you become.

Last year, I woke up early to catch Stony Brook vs. Monmouth. That game was slotted in what many would call the unenvious 6am time slot, and I had no intentions of actually watching the game. I just wanted to take a peek, see what a real college basketball game so early in the morning looked and felt like, then roll back over to catch another hour or so of shut-eye while the game continued.

I kept watching, and didn't even need an IV of caffeine to keep me awake. The enthusiasm of Rob Stone and Jay Williams didn't hurt either.

When the game ended, it was conveniently time to carpe diem. Stony Brook apparently ekked out a win, but I don't even remember that.  It felt weird, and weird felt great. Monmouth's entire student section appeared drunk, enthralled at the chance to be seen on national television. Time did not matter to them, and it was probably the loudest Monmouth's basketball areana got that season. One of the highlights of the entire program's season came in the form of a loss on a Tuesday morning in mid-November.

This season, onlooking CAA and MAAC schools should be clamoring to ESPN to be inserted into this precarious time slot for further tip-off marathons. Surely a few Lawrenceville, New Jersey watering holes will have a permit to open a little early for fans, and you'd think some Bronco undergrads will be killing brain cells well into Monday night to warm up the vocal chords for Tuesday morning. There's a chance for some odd tradition to create here, and a college basketball sub-culture waiting to embrace it.

I'll surely be up early Tuesday to watch some marginal basketball. I recommend you do the same.