The Morning After Recap: Tuesday, November 15

Share All sharing options for: The Morning After Recap: Tuesday, November 15

We aren't even halfway into this marathon and the underlying theme on this morning might be drowsiness. Thankfully, live blogs over at CBS Sports and Ballin' is a Habit (among others) have helped to keep the discussion flowing well into the morning hours, even as the constant allure of a warm bed and soft pillow grows stronger by the hour.

The games themselves throughout this ordeal have been a mixed bag. For every nail-biter we get, a clunker follows shortly thereafter. Even with plenty left to look forward to later in the day, it wouldn't have been the worst thing in the world to toss an extra game or two in the 2-6 am slots to keep things lively. Here's your heavily-caffeinated morning recap on this glorious Tuesday...

Providence - Beating a mid-major team of Fairfield's caliber, and doing it away from home no less (distance be damned), is quite a feat for first year coach Ed Cooley. This gets even better when you consider that Cooley was the guy who built the very Fairfield squad he took down. A proud homecoming, indeed.

George Mason - Let's just say that the Paul Hewitt era is not exactly going swimmingly. After nearly dropping its opener on Friday, George Mason needed an extra period yet again to decide its own fate. And this time they fell short, to Isiah Thomas of all people. Embarrassing stuff.

Kevin Pangos, Gonzaga - The true freshman morphed into a trending topic on Twitter for his 33-point performance that included nine makes from behind the arc. He also firmly entrenched himself in the Zags' record book, and probably the vernacular of college analysts across the country. Pangos Mania is in full effect.

47-43 Towson - Score over the final 30 minutes of the Michigan-Towson game, right after the Wolverines stormed out to a 21-0 lead. 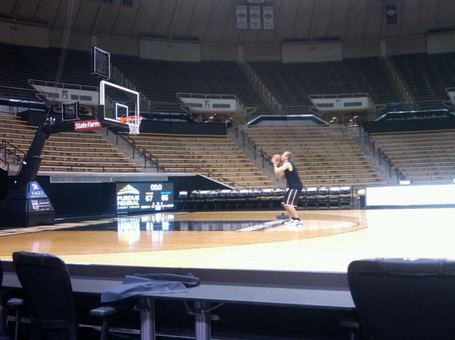