The Morning After Recap: Wednesday, November 16

Share All sharing options for: The Morning After Recap: Wednesday, November 16

Move over, Bob Knight. Your once sacred record is now toast. Mike Krzyzewski is officially the winningest coach in college basketball history. And with at least a couple more seasons before he punches out on his time clock, Coach K looks content to pummel this record into submission.

The Krzyzewski scene last night, with Knight, his former coach/mentor, there to call the game, was pretty special to witness. Unfortunately, that didn't take away from the fact that the whole ordeal was a tad, oh how do you say it, anticlimactic. Let's be real here, even if Duke stumbled against Michigan State there would always be the next game, or the game after that, or the one after that. We already knew this record was going to be broken in 2011, and that Coach K would be the one to do it. The time, the place and opponent were mere formalities.

But above all, Krzyzewski, for his ability to sustain such a high level of success, is a rare old school teacher and leader who's running circles around his new school competition with regularity. There aren't many coaches out there like him, and there might never be. Even though our heads will explode if we start hearing about No. 904 and No. 905, Coach K deserves all the credit in the world for this achievement. Congrats, Mr. 903. Now let's see you hit 1,200.

Memphis - Everyone was picking them to lose to Belmont. EVERYONE. And Memphis literally had a grasp on this game all evening. This is a win that will absolutely stand out on Josh Pastner's resume come March.

UCLA - Sure, your best player Reeves Nelson is suspended. But that can't excuse a 20-point curb stomp at the hands of Middle Tennessee State, who is essentially a football school that isn't very good at football. At this point it doesn't look like Ben Howland's team is capable of beating anybody, let alone a Pac-12 rival.

J'Covan Brown, Texas - Nobody figured him for a big scorer, but after two games he's been exactly that. Thirty-five points, 5 of 10 from long range, and then six rebounds with six assists against a sneaky-good Rhode Island program is no joke. Brown taking the reigns like this could be the No. 1 thing that vaults Texas up the Big 12 ladder.

45.21% - Percentage of Weber State's shot attempts that have come from 3P land this year. But here's the crazy part: The Wildcats are connecting on 55.8% from three and only 44.4% on twos. 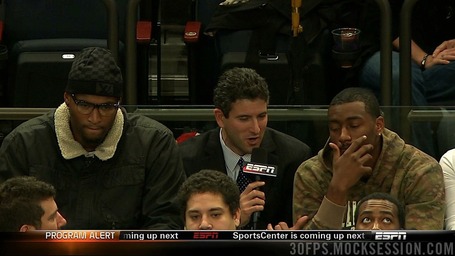