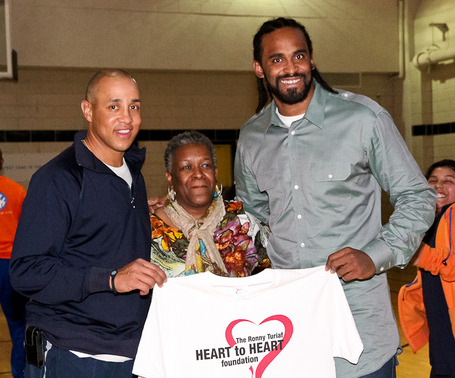 Fresh out of college as a newly selected member of the Los Angeles Lakers' 2005 draft class, former Gonzaga Bulldogs forward Ronny Turiaf was supposed to be living the dream. But before he could even get comfortable in his new life as a professional athlete, an enormous bombshell rocked him to the core.

Team doctor's had found an enlarged aortic root in his heart, very much a life-threatening condition that required open heart surgery. His NBA contract was soon voided, a mere days after hearing his name called. Even though the team decided to pay for his expensive surgery, Ronny's future as an athlete would have to be put on hold.

Because of early detection the surgery was a resounding success, and Turiaf wasted little time getting back into the swing of things. Originally expected to miss a full year of action, the determined big man was back on the court playing for the Lakers in less than six months time. He hasn't stopped since.

Knowing that his own situation afforded him a life-saving opportunity that so few are able to receive, Turiaf created the Heart to Heart Foundation, a charity that is not only integral in putting defibrillators in schools, but educating on the benefits of healthy heart awareness. After all, Turiaf is a living, breathing example of what early detection can do.

The thing is, all this philanthropic stuff is hardly new for Ronny. Most folks up in Spokane, Washington know him as one of the nicest guys they'll ever meet, and aren't shy about letting you hear it. In his foreword for Dave Boling's book, Tales from the Gonzaga Hardwood, head coach Mark Few brought up Turiaf's name first of when talking about players who were also great people. "Lost in all the wins and NCAA appearances is the fact that a guy like Ronny Turiaf has probably made 100 charity visits in his time here," Few wrote. And that was before he became an NBA player.

Since his days in college Turiaf has been a jack-of-all-trades when it comes to giving back to those in need. Virtually everywhere he makes a brief stop over his career he finds a way to help the community long after leaving town. From high school to high school, from town to town, the man literally does so much nationwide that it's often hard to keep up.

But he always finds time to make his presence known back in Spokane, in his old stomping grounds. Over the summer Turiaf and his Heart to Heart Foundation unveiled a new community court one day, headlined a fundraising charity dinner the next and judged a slam dunk contest the following afternoon. Best of all, Turiaf's ear-to-ear grin never left his face the whole time.

There are hundreds of stories about athletes who give back in order to publicly adjust their image. Ronny Turiaf is the polar opposite of this type of person. And the world is better because of it.

To see the rest of the Buick Human Highlight Reel, and even share a story of your own, go to ncaa.com/buick. This post is sponsored by Buick.