"Feel Good Story" of the year is Robbie Hummel's to lose

Share All sharing options for: "Feel Good Story" of the year is Robbie Hummel's to lose 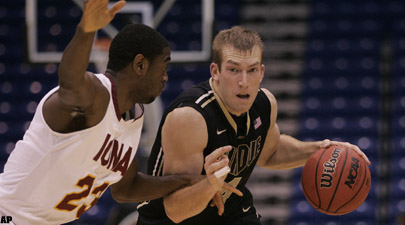 By all accounts, there isn't a media member or coach in all of college basketball who has said a bad thing about Purdue's Robbie Hummel.

The consummate gentlemen, described as gracious and hard-working, the Boilermaker's star has had to endure two ACL injuries in the past calendar year, which did a lot to spoil real chance for Matt Painter's highly touted 2007 recruiting class to reach the Final Four.

Coming within eight months of each other, Hummel's injuries were emotionally crippling, and questioned your religious beliefs. It was so unjust!

But just four games back into Hummel's delayed senior season, he's well on track to be the "Feel Good Story" of the year. Undefeated and hopefully enjoying at least a few hours Caribbean sun and ocean, Purdue sits 4-0 with wins over Iona and Temple. Tomorrow, they'll square off against Alabama in the finals of the Puerto Rico Tip-Off.

Currently averaging 21 an 5, Hummel is hands-down the best player on decent team. One with an outside chance to contend for the Big Ten championship despite having far less talent than in the past four seasons.

"When you play with two guys, one of them is scoring 2,000 points [E'twaun Moore] and the other is a first-team All-American [JaJuan Johnson], maybe deferring to them maybe isn't such a bad thing," Hummel told The Sporting News. "I never felt like I passed up open shots or anything like that. We had a really good team, so we could spread it out.

Now, as the focal point of Painter's offense, it's unlikely any Purdue fan would want Hummel regularly passing up shots this season.

Instead of sitting in the corner for an open three off the bounce of the aforementioned Moore, it was Hummel given the ball Thursday's game against Iona on the line. Down two with just 20 seconds to play, Hummel re-introduced himself to the college basketball world with a game-ending three. He finished with 24 points and 10 rebounds; unquestionably the best player on the court.

It reaffirmed to everyone that despite two major leg surgeries the old kid still has it. At this rate, he'll challenge Ohio State's Jared Sullinger for conference POY honors, and will become one of the feel good stories in college basketball this season.