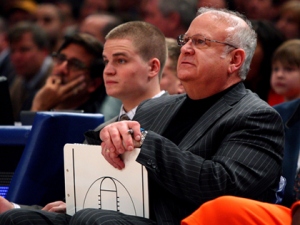 The allegations are gross and, if true to any extent, provides us with another incredibly upsetting story that sullies a proud college athletics program and makes us feel terrible for the victim.

But three days after the news first broke regarding Syracuse's long-time assistant head coach Bernie Fine and his relationship with Bobby Davis, a former Orange ball boy who is now 39-years old, it appears that no other people have come forward to corroborate the alleged abuser's story. Davis continues to remain steadfast with his allegations, though, shooting down the initial claims made from Jim Boeheim.

Basically, we're well on our way to a harsh war of words that could force people to take sides and divide a community.

Here's a rundown of public response's since ESPN first ran the grim Outside the Lines story. If this were a see-saw, both sides would be equally weighted.

There's a sense that we're getting awfully close to a major shift in this story. Either the next report we hear will be in defense of Bobby Jones to solidify his story, or another prominent Syracuse community or college basketball member will quell the allegations by defending Fine, thus adding another body to his roster of defenders.

Right now, Bobby Davis is telling a great lie or Bernie Fine did an exceptional job of covering up something disgusting. The longer this story carries on, the worse off we all are.