The Morning After Recap: Monday, November 21

Share All sharing options for: The Morning After Recap: Monday, November 21

Because from everything we've seen so far, even after Kentucky's off-day against Old Dominion on Sunday, these behemoths are absolutely a pair of Elite Eight squads at the very least. Sometimes after a few games you can just get a sense for what teams at this high of a level are about, and there's a lot to like about these two teams right now. The Heels have yet to be tested for a full 40-minute game, but that's something we may not see very often this year with such a versatile attack. And the 'Cats still have the most talent from 1-6 of anybody in the country, and this crop of freshmen might be Coach Cal's best yet.

Plenty of basketball still needs to be played before the UK/UNC showdown really heats up, but the possibility of a No. 1 vs. No. 2 meeting for the right to stay undefeated (most likely) is something we can't ignore.

St. Louis - The Billikens led a road-weary Washington team 50-25 at the half and still couldn't even give the game away if they tried. In what will probably go down as St. Louis' most impressive victory of the entire season, it was 6'6" senior forward Brian Conklin who led the charge with 25 points.

Mississippi - The highlights: Missed 20 of 23 three point attempts, gave the ball up 19 times, and best of all, committed an eye-popping 33 fouls. It's a miracle this team only lost by 27.

Shabazz Napier, Connecticut - The ninth triple double in school history, Napier went off for 22 points, 13 rebounds and 12 assists. On a team where Jeremy Lamb has already made a name for himself as a dangerous nightly scorer, this is very much an eye opening performance out of Napier.

0.57 - Points per shot (PPS) for South Alabama vs. Florida State. The Jaguars were held to 23.5% shooting from the field, including 24 consecutive bricks from three point land. 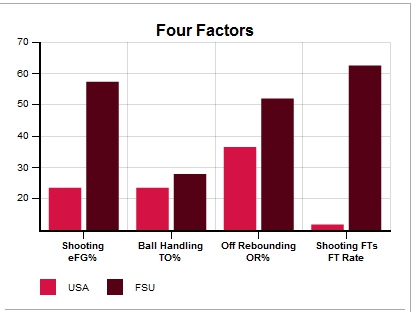